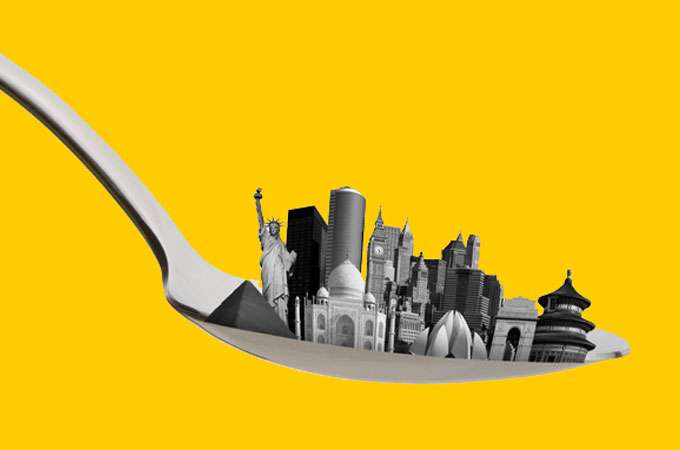 Can Cities Feed Us?

For every acre of land cultivated in a high-rise urban farm, 10 to 20 acres of current cropland could go wild.

Sometime in mid-2007, the world’s demographic scales tipped. Only a century earlier, urbanites represented just over 14 percent of humanity. But by 2007, a majority of the world’s people lived in cities, and more are on the way. Over the coming decades, cities will absorb all predicted global population growth and then some. According to the U.N. Population Division, there will be 6.4 billion urban dwellers by 2050—as many people as lived on the entire planet in 2004.

That stark reality leads to another: feeding this new urban world with an old agricultural model could be a recipe for environmental ruin—and human misery. The cost of growing food on large plots of land far away from cities and transporting it to the teeming masses has begun to outweigh its benefits. Not only is the carbon footprint of such a system huge, but more often than not traditional farming has been a disaster for natural ecosystems and wildlife. And then there’s the problem of space. Already, over 80 percent of the world’s arable land is in use—some of it highly degraded. Add the 2.5 billion people who are likely to join us on the globe by 2050, and there’s simply not enough room to keep farming the way we have been.

In response, Dickson Despommier, a professor of public health at Columbia University, wants to turn the old system on its head. For the past decade, Despommier has been cultivating a vision of farms filling glass-and-steel towers the size of a city block and 30 stories high. Just one high-rise farm, he has calculated, could feed 50,000 people 2,000 calories a day all year round. Scale that up, and skyscrapers could produce enough food to feed everyone in Manhattan in a space roughly one-fifth the size of Central Park.

Despommier’s ideas are a far cry from the backyard chicken coops and vacant-lot community gardens that are most frequently touted by urban-agriculture advocates. But he passionately believes that if we think differently about food production, the big cities of the future might just be able to feed themselves.

His optimism, however, didn’t come automatically. In 1999, students in one of Despommier’s classes decided to explore the potential of rooftop agriculture in New York City. The results of their calculations were depressing: even if all of the city’s residential rooftops were converted to rice paddies, the resulting crop would provide only two percent of Manhattan residents’ caloric needs.

“Why don’t we just put the farms inside the buildings?” Despommier recalls saying. It was a throwaway line at the time. “But the more I thought about it, the more appealing that solution became.”

A 30-story building may not sound like much space compared to acres of rolling Kansas wheat, but the year-round indoor growing season quickly multiplies yields—two crops of tomatoes per year, three crops of wheat, even ten crops of strawberries. Plus, vertical farming is a chance to play a giant game of agricultural Tetris®: dwarf varieties of wheat and corn can be planted at twice the density of standard field crops, and trays of plants can be stacked two, three, or sometimes five layers deep per floor. The harvest adds up fast.

Despommier cites a long litany of vertical farming’s potential benefits. Farmers would no longer be vulnerable to droughts, floods, or storms—a particular advantage in a world buffeted by climate change. There would be no further need to burn fossil fuels for plowing, harvesting, or shipping food long distances to market. Streams and rivers would run clear, unbefouled by pesticide and fertilizer runoff.
“The very best reason for indoor farming is that you save outdoor land for something else,” Despommier says. Vertical farming could shrink the physical footprint of agriculture by upwards of 95 percent—for every acre of land farmed indoors, he has estimated, 10 to 20 acres of current farmland could go wild. Fields would return to forests, sequestering huge quantities of carbon as an added bonus.

The basic idea of growing food indoors is nothing new—the first greenhouses were built in the thirteenth century. And today’s greenhouses, of course, often have massive carbon footprints. But Despommier is doing more than just stacking greenhouses on top of one another. Instead, he’s orchestrating an ecosystem in which energy, water, and nutrients would be recycled from floor to floor.

On one floor of a vertical farm, you might find a kind of indoor marsh, with cattails and sawgrass to filter municipal graywater. The purified water would be piped off to other floors to provide water to small animals and to irrigate crops. Most of the crop plants would likely be grown hydroponically, with their roots submerged directly in water or embedded in a soil-less growing medium such as vermiculite, or aeroponically, suspended in the air and enveloped in a nutrient-rich mist. These technologies use up to 90 percent less water than soil-based agriculture, and to make the system even more water-efficient a network of cold-brine pipes would collect water released by the plants through evapotranspiration so that it could be recycled again.

Each floor of the tower would have specific temperature, humidity, nutrient, and light conditions tailored precisely to each crop. The heat on one floor would be cranked up to grow tomatoes and peppers and turned down on another to nurture cabbage and kale. Nutrients would come from sterilized, dried, and powdered wastewater solids; highly efficient LEDs would supplement natural sunlight. A positive-pressure system much like the ones in hospital ICUs would keep out diseases and pests.

The energy to run all these systems could come from wind, solar, or geothermal sources where feasible. Elsewhere, waste—including the inedible portions of crop plants—could be burned for energy or digested into methane.

If all this sounds a bit futuristic, Despommier points out, the technologies necessary to execute his vision already exist—though they’ve never been integrated into a single system. For example, biosolids (sterilized sewage sludge) are already used as fertilizer in all 50 U.S. states. Modern hydroponic systems were developed in the 1930s; the world’s largest hydroponic outfit produces over 100 million pounds of tomatoes in the Arizona desert each year, and the technology is also used to grow vegetables at McMurdo Research Station in Antarctica.

Despommier compares his vision of vertical farming to working with a box of Legos®—the blocks are all established technologies; he’s just putting them together in a new way.

Not all indoor farms would have to be massive. “I’m imagining [some] attached to restaurants, schools, hospitals, or on the tops of apartment buildings,” Despommier says. A one-story, one-acre rooftop structure could yield the equivalent of 16 acres of field-grown produce. He also envisions a smaller-scale, modular version of the system that could be used as a kind of “M.A.S.H. unit for agriculture” in famine-plagued or war-torn regions. Instead of merely receiving food aid, refugees could grow their own food—recycling water and processing human waste at the same time.

A major hurdle is cost. To build a small experimental farm—say, 5 or 10 stories—from scratch would cost somewhere between $20 and $50 million, Despommier believes. Yet consider this: a smaller indoor farm at Cornell University has been able to grow 68 heads of lettuce per square foot per year.  At $2.50 per head, that’s as much as $170 per cultivated square foot per year—or millions of dollars per farm floor.

Still, the potential revenues haven’t been enough to draw a flood of investors. Despite widespread interest in the concept, no high-rise farms exist yet. But they’re getting closer. One of the most promising operations is taking root in Chicago, where John Edel is pioneering the kind of for-profit/nonprofit/academic partnership that could make vertical farming feasible, at least at first. Last year, Edel began collaborating with professors and students from the Illinois Institute of Technology to establish a small test farm in the basement of his Chicago Sustainable Manufacturing Center. “We have 70 tilapia right now, and we’ve run through maybe five different [crop-] growing systems for testing purposes,” he says.

And now it’s time to scale up. In June, Edel closed on a 95,000-square-foot former meat-packing plant on the city’s South Side. The building will house a 10,000-square-foot, for-profit farm plus a 30,000-square-foot research farm that Edel plans to operate as a nonprofit organization. There, he and his collaborators plan experimental plots to further refine their indoor farming techniques, with the goal of developing a kind of “open-source system” that could be used by other vertical farm endeavors.

“The other half of the building is essentially going to be a food-business incubator,” Edel says—one that will integrate small start-up enterprises into the vertical farm ecosystem. For example, a microbrewery has leased space in the building, and Edel envisions composting the otherwise worthless spent distiller’s grain to use in the farm. Meanwhile, oxygen produced by the plants could be piped out to improve air quality in the various office and factory areas. “Our goal is to get the facility to net zero on energy and net negative on waste.”

If all goes according to plan, the first vegetables should be ready for harvest—or “start coming off the line,” as the sustainable-manufacturing entrepreneur puts it—by Thanksgiving. ❧

Sarah DeWeerdt is a Seattle-based freelance writer specializing in biology and the environment.

Further Reading: The Vertical Farm: The World Grows Up by Dickson Despommier, published by Thomas Dunne Books /St. Martin’s Press, will be available in October 2010.