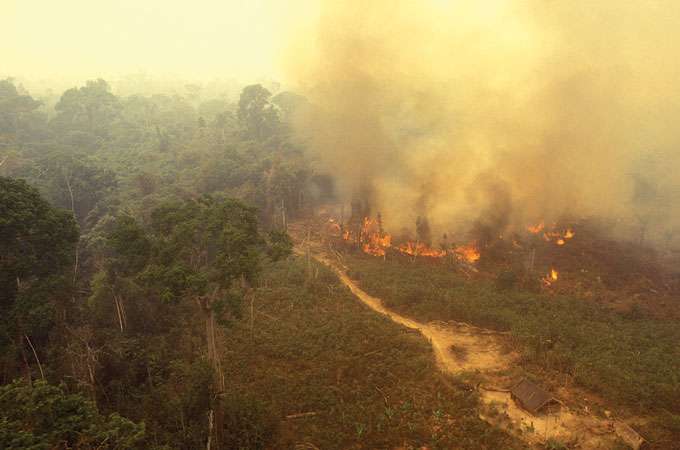 Growing Up in Smoke

Slowing deforestation is one of the most straightforward and effective means of reducing carbon emissions into the atmosphere.  It might also be expected to reduce the frequency of forest fires, which are big contributors to carbon emissions in their own right. But new research suggests a startling paradox: in the Amazon, reducing the rate of deforestation leads to an increase in forest fires.

Luiz Aragão of the University of Exeter and Yosio Shimabukuro of Brazil’s National Institute for Space Research identified this strange trend in a paper in Science. The researchers used satellite data to examine the relationship between rates of forest clearing and fire frequency in the Brazilian Amazon from 1998 to 2007. They concluded that, once the original forest has been cleared, increases in fire frequency likely result from the widespread practice of slash-and-burn agriculture in areas of fast-growing, secondary forest cover. These areas are highly susceptible to both deliberate burning and accidental ignition. Fires originating in these areas of human activity may subsequently spread into primary forest areas.

As negotiations continue on a massive plan to give developing countries financial incentives to reduce deforestation, the researchers warn that more-frequent and larger forest fires in the Amazon may offset whatever benefits this might achieve.  To prevent this, they call for expanded monitoring of land use in secondary forest areas as well as greatly expanded use of fire-free agricultural methods. ❧