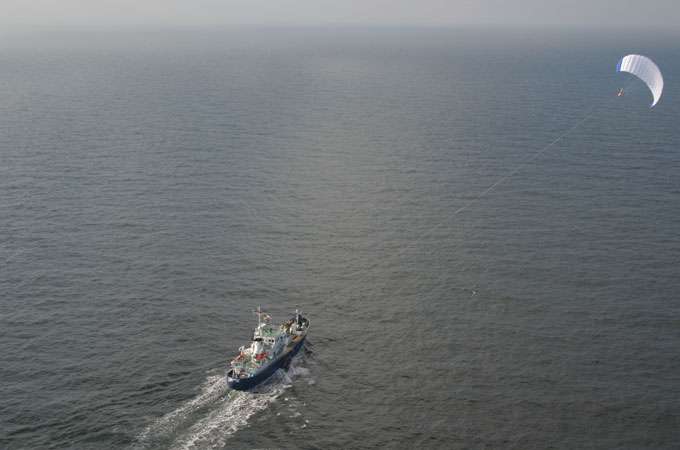 As offshore wind power gains momentum, researchers have been struggling with how to wring power out of the ocean’s strongest winds—which flow hundreds of miles offshore in waters too deep to support traditional wind turbines. A newly proposed technology could solve that problem by using an intriguing mix of ships, generators, and “sails” the size of baseball stadiums.

The ships would operate in wind hotspots such as the north-central Pacific and the southern oceans surrounding Antarctica, where winds blow full-circle around the globe without land to break their momentum. There, the ships would unfurl gigantic sail-like parafoils and let them rise about a mile above sea level, where winds are up to four times as fast as those at the ocean’s surface. The parafoils would tow the ships and, in the process, churn water through turbines on the ships’ hulls.

Which raises a question: how do you transport the resultant electricity back to land? The answer: use it to hydrolyze seawater, then combine the hydrogen with carbon dioxide to produce methanol, which could easily be stored on board the ships. One ship design, published in the journal Energy, could produce 100,000 tons of methanol every month. This could be transported on tankers for use in heaters, factories, or fuel cells.

It wouldn’t be the first time that kites flown from ships were used to produce or conserve energy. SkySails, a company based in Hamburg, Germany, sells parafoils which can be used to partially power ordinary cargo ships, reducing fuel consumption by up to 35 percent. To evaluate the new wind-power proposal, it’s important to factor in the cost of designing, building, and operating ships that are completely devoted to wind power, says SkySails engineer and co-founder Stephan Wrage. “Such a project has to be calculated very carefully,” he says, “and compared to other renewable energy sources regarding the cost per kilowatt hour.” ❧