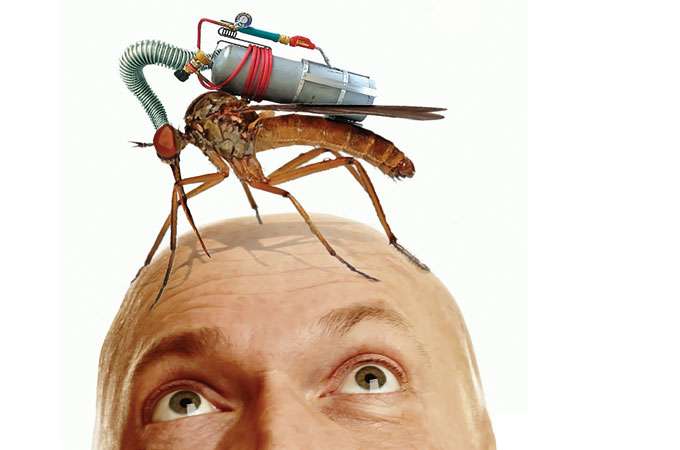 For years, scientists have wondered whether it’s possible to turn the mosquito’s ability to spread malaria into a weapon against diseases that plague humans and wildlife. But no one had been able to genetically alter the insects to deliver vaccines—until now. A pioneering group of Japanese scientists has used mosquitoes to inoculate lab mice against leishmeniasis, a parasitic disease that can cause everything from skin sores to liver damage.

The secret, it turns out, is in the spit. Led by Shigeto Yoshida of Yichi Medical University, the research team started with a salivary protein that acts as a leishmeniasis vaccine. By injecting that protein into mosquito embryos, the researchers bred mosquitoes that contained the protein in their saliva.

They then set the mosquitoes loose on four unsuspecting mice, which received a total of around 1,500 bites. Little did the mice know that it was for their own good; all four of them emerged with leishmaniasis antibodies. And the researchers believe that, with some significant tweaking, a similar reaction could be triggered against other wildlife and human diseases, including malaria. From there, the next step would be to develop hordes of the pesky critters and unleash them in areas where a disease is rampant.

Cue the spooky music. As enticing as the vision of slashing malaria infections might be, the research paves the way for a host of ethical quandaries, at least when it comes to humans. For instance, would citizens accept being unwittingly exposed to a vaccine? If those ethical hurdles can’t be overcome, modified insects could still be used to help wildlife populations, according to David O’Brochta, an insect geneticist at the University of Maryland. For example, the endangered

Ethiopian wolf Canis simensis has been decimated by rabies. Using insects to transport a vaccine rather than dispatching people to find the wolves could prove to be a more efficient and affordable way to contain rabies outbreaks.

To those worried that humans might accidentally receive such a vaccine, O’Brochta explains that many insects are zoophilic, meaning they bite only a particular species. The key would be choosing a carrier insect that targets only the species at risk. ❧