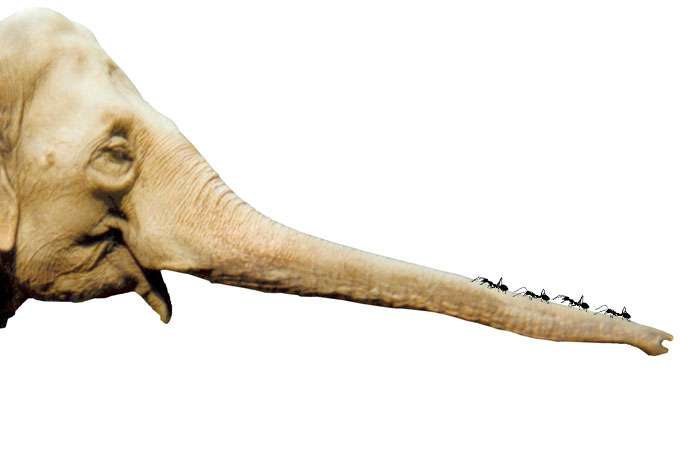 Pitting ants against elephants doesn’t seem like a fair fight. But according to a study in Current Biology, these humble insects can act as mighty “bodyguards” that prevent elephants from munching trees on the African savanna.

The idea for the study arose when researchers noticed something strange about savanna satellite images from 2003 and 2008. Although the number of elephants in the region had grown during that time, tree cover in certain areas hadn’t changed. That was surprising, because elephants typically eat trees and can turn savanna into grassland.

The unaffected areas contained mainly whistling thorn (Acacia drepanolobium), trees that house ants, so the researchers wondered whether ants were somehow keeping elephants away. To find out, they used smoke to drive ants out of some trees. Sure enough, the antless trees “suddenly became much tastier to elephants,” says co-author Jacob Goheen of the University of Wyoming.

The team then performed feeding tests with elephants to determine whether ants were responsible for the landscape patterns. They offered branches, both with and without ants, from whistling thorn trees and branches from another tree that elephants normally ate. The elephants would eat either tree, but they were far less likely to eat branches with ants.

The ants defend trees by swarming into an elephant’s nostrils and biting the flesh, according to the study. Whereas giraffes can swipe ants away with their tongues, elephants are more vulnerable because their nostrils are located far from their mouths.

By maintaining tree cover, ants influence large-scale ecosystem processes such as fires and carbon storage, the authors say. And the chemicals emitted by these insects could help reduce  human-elephant conflict.

Since elephants seem to avoid the ants based on smell, spraying the chemicals on farmland could make crop-raiding elephants steer clear. ❧