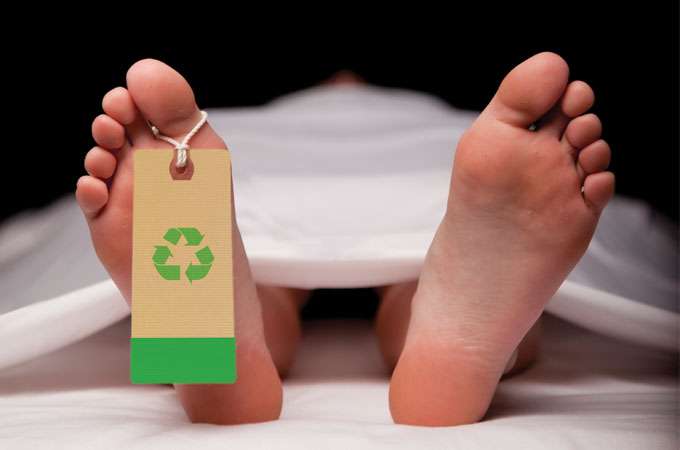 “We can bury her, burn her, or dump her.” The lucrative business of running funeral homes is rarely as blunt as that portrayed by Monty Python, a British satirical television show, and certainly not a front for cannibalism. But burial rites in most of the modern world remain an expensive relic of 19th-century habit. The last big innovation was cremation, which is now under fire for its environmental costs. A study conducted in 2007 for Centennial Park, a cemetery in Australia, found cremations produce the equivalent of 160 kg of CO2 per body. A cemetery burial emits a mere 39 kg. But maintenance (mowing lawns and the like) makes the ultimate carbon footprint of burial bigger than cremation.

Both tend to make extravagant use of coffins made from valuable hardwoods such as oak and mahogany. In America the coffin may then go into a cumbersome and expensive burial vault. Unpleasant chemicals abound. A paper published in the Journal of Environmental Health in 2008, titled “Drinking Grandma,” warned about the public-health risks of formaldehyde leaking from cemeteries into groundwater. Cremations are dirty, too. Dental fillings mean that they account for as much as a fifth of Britain’s mercury emissions; regulations require crematoria to cut mercury emissions by half by 2012.

Customers (or their relatives) want change. A survey in 2007 for the AARP, an American senior-citizens’ lobby, found that more than a fifth of respondents wanted greener burials; subsequent surveys have had similar results. That can mean sharing hearses, or using home-grown flowers and coffins made with cardboard or willow, which biodegrade easily. But bigger changes are also afoot.

One is that more people want to be buried in natural habitats—not headstoned in neatly ordered plots, or in vaults. Although natural-burial grounds exist in places as far afield as America and Australia, they are most widespread in Britain, thanks largely to permissive rules. The first natural-burial ground was set up in 1993. More than 200 have since opened. Andy Clayden of the University of Sheffield says that 242 natural-burial grounds are either up and running or planned in Britain, only just fewer than the country’s 252 crematoria.

Ireland’s first natural-burial ground won planning permission last month and is due to open in October. Colin McAteer, who runs it, says indebted Irish property owners are calling him in the hope that their undeveloped land could be used this way, too. It is not an obvious commercial bet: burial grounds cannot be redeveloped, so banks are unlikely to want them as collateral. But they can make some money. Mr. McAteer’s site will also be a managed forest, for example.

New technologies are changing the picture, too. One is “water cremation” or alkaline hydrolysis, where a corpse is placed into a heated solution of water and potassium hydroxide. In a few hours, the corpse dissolves into an inorganic liquid, which can be used as a fertilizer, and a white ash-like residue. Aquamation Industries, an Australian company, opened a water-cremation facility in Queensland last month. Resomation, a British firm, will install equipment in Florida by the year-end. Its founder, Sandy Sullivan, says conventional cremation produces four times as much CO2 as does this process.

Another nascent technology takes a different approach. The body is freeze-dried in liquid nitrogen, then vibrated so that it dissolves into a fine powder. Further processes evaporate water and remove things like mercury. The residue can be put into a shallow grave and turns to mulch in about a year. Observers reckon that the Swedish company which developed the idea, Promessa, has promised much and delivered little. But Susanne Wiigh-Masak, its founder, says that franchises are now in place in South Korea and Britain, and that the need for crematoria to comply with mercury-abatement rules could also prompt orders in Sweden itself.

None of this yet amounts to a revolution. There are no good data on take-up of green options. New technologies need new legal frameworks, and legislators tread very carefully when it comes to death. Members of the public may take time to adjust to the idea of being dissolved (though cremation was seen as outrageous in its day).

Natural-burial grounds do not wholly avoid the problem of land scarcity (the fact they can have several uses helps). In theory, the funeral industry ought to be happy to offer whatever consumers want. But Joe Sehee of the Green Burial Council, a nonprofit organization, says that in America at least, many funeral directors are unwilling to ruffle the feathers of suppliers of coffins, vaults, and the like. Even so, if the traditional funeral is to be buried, concern for the environment is the likeliest undertaker. ❧