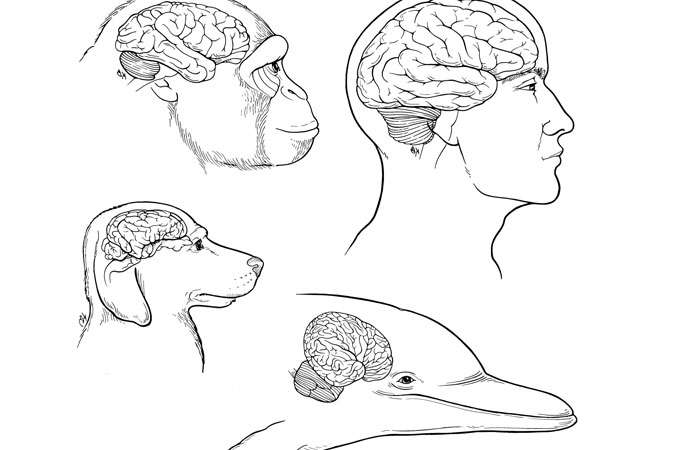 The manifest good nature of dolphins, who have every reason to be leery of people (we swipe their fish, drown them in nets, and sometimes even shoot or spear them), is infectious. One can only hope that these occasional encounters do as much good for the dolphins concerned, because a dolphin that seeks human company must be a scientist, or some other sort of misfit, who cannot quite make it with his own species; his, because these solitary individuals nearly always seem to be males, and there must be some message in that.

So, apart from the fact that some of them are crazy, what is so special about dolphins? Well, for a start, the story is that they are quite intelligent. Intelligence is a curiously indefinable asset. We have difficulty rating it even amongst ourselves, so much so that practically no two experimental psychologists, educators, or sociologists can agree on suitable tests. A major block is cultural. Your perception of the way the world is and your capacity to score in intelligence tests plainly depends on your upbringing. A European would fail miserably in an intelligence test devised by an aborigine. So we have very little chance of making an objective measurement of intelligence in any other animal. The best we can do is to observe that the animal seems to assess the likely outcome of complex situations by putting together information from several sources. Usually that means noting that the animal learns by experience in circumstances in which we would learn ourselves, an anthropocentric view that assumes that we have the answers and that other animals are struggling to catch up.

Dolphins, even by this rather dubious criterion, are intelligent. They learn fast in captivity. They can be trained to discriminate, recognize hand signals, even develop a sort of syntax for auditory communication with their captors. They may not have the nous to have learned to avoid people but they have—it is repeatedly pointed out—got very big brains.

The credit given on account of this last factor shows how fragile human intelligence can be. The reasoning applied runs somewhat as follows: Animals with big brains seem to indulge in more complex behavior than do pinheads; the brain is therefore the seat of intellect. Dolphins have big brains, so they are intelligent, sensitive fellow creatures. Save the whale.

The trouble with the argument about big brains is that it doesn’t even work for man. Throughout a large part of the last century scientists did a great deal of head measuring in an attempt to assess the relative status of people, within societies and between races. A lot of dangerous conclusions were drawn as a result. White Europeans and white Americans came out on top, with the widest hatbands and the greatest cranial capacities. The lesser breeds of mankind, blacks and Native Americans, aborigines, and women of whatever race, had smaller brains and were plainly in their then-inferior positions for good reasons. Craniology became a major science, confirming what the white, Anglo-Saxon male already knew to be true.

The flaw, in the human instance, was that craniologists tended to be a little vague about scale and age effects. Women are generally smaller than men, and brains shrink as people get older, so that samples are liable to be skewed in ways that make them difficult to compare. Attempts to show, for example, that white-collar workers had bigger brains than laborers foundered in statistics—human variability is too great. And there was the embarrassing evidence of Neanderthal man, who had a larger brain than any of us and nevertheless somehow contrived to get himself extinct.

The brainy dolphin argument is flawed anyway, because the two sorts of brain, man’s and the dolphin’s, have evolved to do quite different things. Dolphins seek their prey in water that is often cloudy with plankton, turbulent and muddy, or just plain dark. In these circumstances vision is a poor way to find fish, and we must suppose that the early proto-dolphins, lacking the pressure-sensitive lateral line of fish, were driven to discover their whereabouts much as a blind man does today—make a noise and listen for the echo. If the system was crude to begin with, it is anything but crude now. Dolphins squeak underwater and listen to the echoes. The analogy with bats is obvious; they, too, squeak and listen. But the similarity practically ends there. Bats are, forgive me, batting on a far easier wicket. Air is a lot less dense than water, and flesh is mostly water. The head of a dolphin is of much the same density as the sea in which the animal is swimming. So there is little or no reflection; the sound waves tend to pass straight in and out the other side. That makes noises difficult to hear and sound sources very difficult to locate; the skull does nothing to blanket noises from one side, and both ears get an equal signal. Lie in the bath with your ears under the water and turn on one of the taps; it is almost impossible to determine which one is dripping by sound alone. A SCUBA diver can hear boats miles off—sound travels four times as fast in water as in air and attenuates only very slowly—but trying to sort out precisely where they are and whether it is safe to surface is another matter altogether. Dolphins and the other whales do a lot better than we do because their auditory apparatus is largely insulated from the skull. Their inner ears are enclosed in dense, bony boxes, foam-sprung to avoid direct transmission through the flesh and bone of the head, linked to the outside by wax plugs so that the receiving microphones are almost as directional as our own ears.

Dolphins, underwater, emit high-pitched squeaks generated by driving air through a reed pipe in the nasal passages. The skull, an odd shape concealed beneath the fleshy dome of the forehead, forms a reflecting dish, beaming the sound forward.

Interpreting the echoes is the difficult bit. A boat’s echo sounder emits bleeps of regular duration at regular intervals, times the return of the echoes, and, if all goes well, tells you how far away the bottom is, if weed, fish, garbage, and an excessive degree of heel don’t interfere.

But supposing you were after more information than a simple bounce off the bottom can give you? Throw the same signal horizontally, and a whole range of echoes of varying intensities come back. Echo quality depends on the difference in density of the reflector and the medium. A swim bladder in a fish will give a good echo, because air is less dense than water. It will give an even better echo if the wavelength of the sound signal approximates to the size of the bladder, hence the high frequencies of most of the sounds that dolphins make. Middle C, with a wavelength of five and a half meters underwater, would do fine for locating a submarine, but is not so hot for finding herrings. High frequency equals shorter wavelength equals better resolution, but it increases attenuation, and decreases the range. Echo intensity drops as the distance squared. A large object at a distance can yield an echo of similar intensity to that of a small object close by. A squid doesn’t have a swim bladder; rock reflects well; weed varies as it stirs in the current. Everything, living or dead, reflects an echo that will change in a characteristic manner with distance, orientation, and relative motion. Add to this the fact that many animals make sounds of their own, so that echoes have to be distinguished from primary sources. The problem of analysis moves from the merely horrendous to the diabolical even before the dolphin brain has to start computing an appropriate course of action.

So, dolphins have big brains. That doesn’t necessarily denote intelligence, just the appalling difficulties of signal analysis in the modality in which dolphins are obliged to work. A memory man, who can remember who played outside-right for Sheffield Wednesday at every match for the last fifty years, is not necessarily intelligent. The memory man may not have a lot of time left for anything so imprecise as integrated thought. The dolphin’s aquatic memory bank may require an awesome number of neurons to operate an identification system that would be the envy of any submarine commander, but a library is not intelligent.

Save the whale, by all means. But not on the rather dubious evidence of brain size. There are lots of better reasons. ❧

From: Civilization and the Limpet by Martin Wells, The Perseus Books Group ©2010.
Illustration: ©Kathryn Born. From: The Dana Guide to Brain Health, The Free Press, 2003.