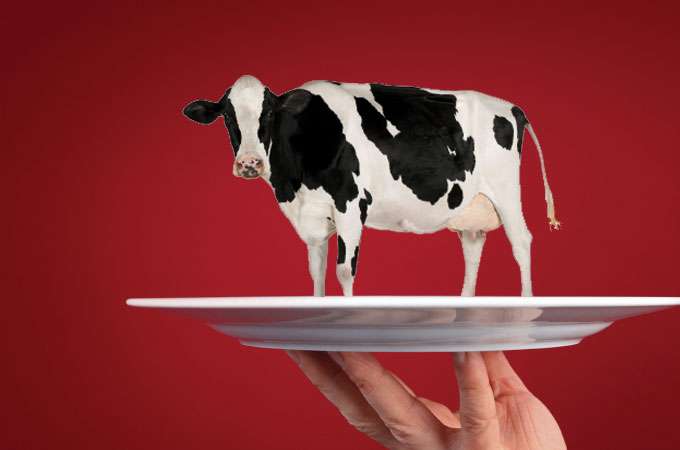 This will not be an easy article to write. I am about to put down 1,200 words in support of a book that starts by attacking me and often returns to this sport. But it has persuaded me that I was wrong. More to the point, it has opened my eyes to some fascinating complexities in what seemed to be a black and white case.

In The Guardian in 2002 I discussed the sharp rise in the number of the world’s livestock, and the connection between their consumption of grain and human malnutrition. After reviewing the figures, I concluded that veganism “is the only ethical response to what is arguably the world’s most urgent social justice issue.” I still believe that the diversion of ever wider tracts of arable land from feeding people to feeding livestock is iniquitous and grotesque. So does the book I’m about to discuss. I no longer believe that the only ethical response is to stop eating meat. 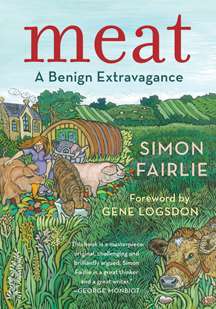 In Meat: A Benign Extravagance, Simon Fairlie pays handsome tribute to vegans for opening up the debate. He then subjects their case to the first treatment I’ve read that is both objective and forensic. His book is an abattoir for misleading claims and dodgy figures, on both sides of the argument.

There’s no doubt that the livestock system has gone horribly wrong. Fairlie describes the feedlot beef industry (in which animals are kept in pens) in the U.S. as “one of the biggest ecological cock-ups in modern history.” It pumps grain and forage from irrigated pastures into the farm animal species least able to process them efficiently, to produce beef fatty enough for hamburger production. Cattle are excellent converters of grass but terrible converters of concentrated feed. The feed would have been much better used to make pork.

Pigs, in the meantime, have been forbidden in many parts of the rich world from doing what they do best: converting waste into meat. Until the early 1990s, only 33 percent of compound pig feed in the U.K. consisted of grains fit for human consumption: the rest was made up of crop residues and food waste. Since then the proportion of sound grain in pig feed has doubled. There are several reasons: the rules set by supermarkets; the domination of the feed industry by large corporations, which can’t handle waste from many different sources; but most important the panicked over-reaction to the BSE and foot-and-mouth crises.

Feeding meat and bone meal to cows was insane. Feeding it to pigs, whose natural diet incorporates a fair bit of meat, makes sense, as long as it is rendered properly. The same goes for swill. Giving sterilized scraps to pigs solves two problems at once: waste disposal and the diversion of grain. Instead we now dump or incinerate millions of metric tons of possible pig food and replace it with soya whose production trashes the Amazon. Waste food in the U.K., Fairlie calculates, could make 800,000 metric tons of pork, or one-sixth of our total meat consumption.

But these idiocies, Fairlie shows, are not arguments against all meat eating, but arguments against the current farming model. He demonstrates that we’ve been using the wrong comparison to judge the efficiency of meat production. Instead of citing a simple conversion rate of feed into meat, we should be comparing the amount of land required to grow meat with the land needed to grow plant products of the same nutritional value to humans. The results are radically different.

If pigs are fed on residues and waste, and cattle on straw, stovers, and grass from fallows and rangelands—food for which humans don’t compete—meat becomes a very efficient means of food production. Even though it is tilted by the profligate use of grain in rich countries, the global average conversion ratio of useful plant food to useful meat is not the 5:1 or 10:1 cited by almost everyone, but less than 2:1. If we stopped feeding edible grain to animals, we could still produce around half the current global meat supply with no loss to human nutrition: in fact it’s a significant net gain.

It’s the second half—the stuffing of animals with grain to boost meat and milk consumption, mostly in the rich world—which reduces the total food supply. Cut this portion out and you would create an increase in available food which could support 1.3 billion people. Fairlie argues we could afford to use a small amount of grain for feeding livestock, allowing animals to mop up grain surpluses in good years and slaughtering them in lean ones. This would allow us to consume a bit more than half the world’s current volume of animal products, which means a good deal less than in the average western diet.

He goes on to butcher a herd of sacred cows. Like many greens, I have thoughtlessly repeated the claim that it requires 100,000 liters of water to produce every kilogram of beef. Fairlie shows that this figure is wrong by around three orders of magnitude. It arose from the absurd assumption that every drop of water that falls on a pasture disappears into the animals that graze it, never to re-emerge. A ridiculous amount of fossil water is used to feed cattle on irrigated crops in California, but this is a stark exception.

Similarly daft assumptions underlie the UN Food and Agriculture Organization’s famous claim that livestock are responsible for 18 percent of the world’s greenhouse gas emissions, a higher proportion than transport. Fairlie shows that it made a number of basic mistakes. It attributes all deforestation that culminates in cattle ranching in the Amazon to cattle: in reality it is mostly driven by land speculation and logging. It muddles up one-off emissions from deforestation with ongoing pollution. It makes similar boobs in its nitrous oxide and methane accounts, confusing gross and net production. (Conversely, the organization greatly underestimates fossil fuel consumption by intensive farming: its report seems to have been informed by a powerful bias against extensive livestock keeping.)

Overall, Fairlie estimates that farmed animals produce about 10 percent of the world’s emissions: still too much, but a good deal less than transport. He also shows that many vegetable oils have a bigger footprint than animal fats, and reminds us that even vegan farming necessitates the large-scale killing or ecological exclusion of animals: in this case pests. On the other hand, he slaughters the claims made by some livestock farmers about the soil carbon they can lock away.

The meat-producing system Fairlie advocates differs sharply from the one now practiced in the rich world: low energy, low waste, just, diverse, small-scale. But if we were to adopt it, we could eat meat, milk, and eggs (albeit much less) with a clean conscience. By keeping out of the debate over how livestock should be kept, those of us who have advocated veganism have allowed the champions of cruel, destructive, famine-inducing meat farming to prevail. It’s time we got stuck in. ❧