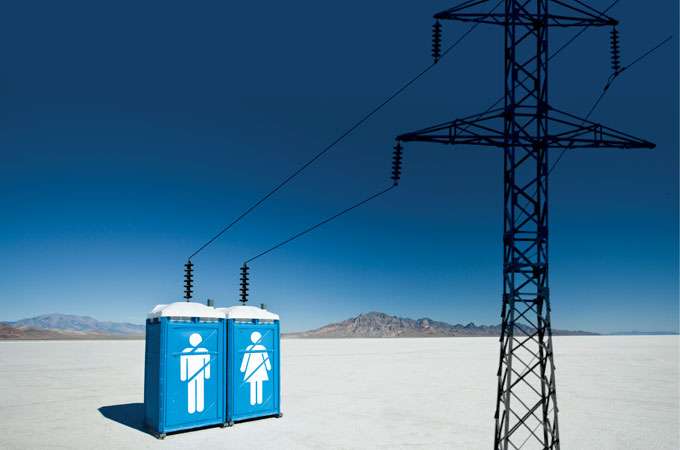 The shower is well known as a source of good ideas. But the toilet? Equally promising, says Gerardine Botte, a professor of chemical and biomolecular engineering at Ohio University who has developed a technology to generate hydrogen fuel from urine.

Botte recognized that urine contains two compounds that could be a source of hydrogen: ammonia and urea. Place an electrode in wastewater, apply a gentle current, and voilà: hydrogen gas that can be used to power a fuel cell.

Her system operates similarly to the electrolysis of water, a process that can be used to produce hydrogen for fuel cells—except that ammonia and urea hold their hydrogen atoms less tightly than water does, so less energy is required to split them off.
Botte isn’t the only scientist with her mind in the sewer. A group of scientists in the U.K., for example, is working on a fuel cell powered directly by urine.

Botte’s technology has the greatest potential for power generation in settings where large numbers of people gather—airports and sports stadiums, for example. An office building with 200 to 300 workers could generate 2 kilowatts of power, Botte has calculated. Granted, that’s not enough to power the building, but every drop in the bucket helps.

The approach could also address pollution associated with animal feedlots. The urine produced by 1,000 cows could generate 40 to 50 kilowatts of power, Botte estimates—getting rid of noxious ammonia in the process.

Earlier this year, E3 Technologies was launched to commercialize “pee power,” with Botte as chief technology officer. The company aims to have a “GreenBox” prototype ready by the end of next year and sees cities as its first potential customers. “You can clean the water in a municipal wastewater treatment plant with much less energy,” Botte says. ❧
—Sarah DeWeerdt