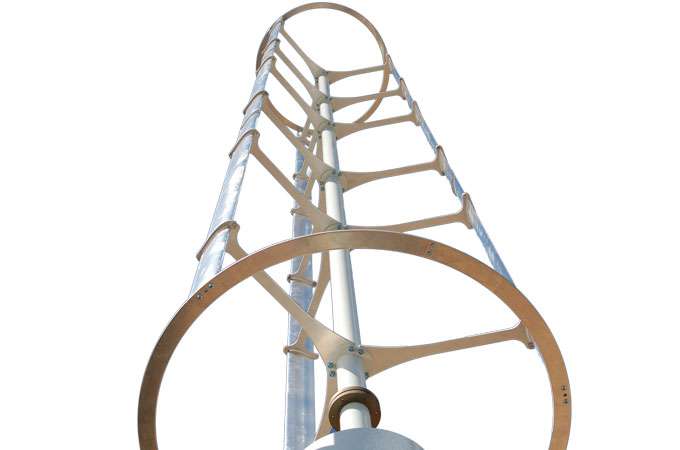 Swimming into the Wind

But John Dabiri, head of the Biological Propulsion Laboratory at the California Institute of Technology, has calculated that we could radically shrink the footprint of wind farms by using vertical-axis wind turbines (VAWTs)—which turn their faces to the sky rather than into the wind. To maximize power generation, he says, the turbines should be arranged much like a school of fish.

Dabiri says the idea first came to mind a few years ago, when he was modeling the use of VAWTs for small-scale power generation in urban environments. He recalls realizing, “The math that I was writing was very similar to what I had seen in a previous work, looking at fish swimming.”

Fish swim in schools in order to move more efficiently through the water, with each fish “drafting” in the wake of the fish in front. Dabiri wondered whether the same principles could enable wind farms to extract more energy from the wind.

A crucial insight was that the wakes shed by neighboring fish spin in opposite directions. So Dabiri and a pair of graduate students created a computer model of closely spaced turbines with alternating clockwise and counterclockwise rotations. “The wind can pass through the ‘school’ of turbines without the turbulence leading to energy losses along the way,” Dabiri explains.

To verify the model’s predictions, Dabiri’s team installed an array of six VAWTs at a remote test site last summer. “And we were able to confirm that in terms of the amount of power you get per unit of land area, we could do a factor of ten better than existing wind farms,” he reports.

The next step is to graduate to a bigger school: Dabiri hopes to test an array of at least 1,000 turbines in order to demonstrate that his arrangement can produce power at the megawatt scale. ❧