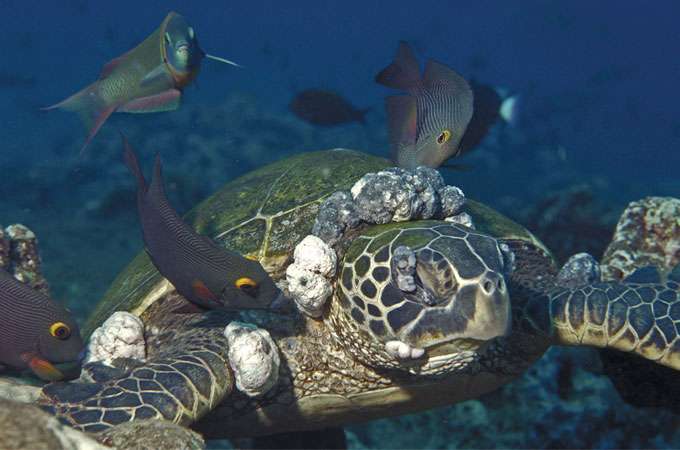 Researchers may have solved the mystery behind a disease that leaves Hawaiian sea turtles with hideous tumors—and the tracks lead back to land, and to an amino acid called arginine.

The green sea turtle (Chelonia mydas) is an endangered species found around the world, mostly in tropical seas. Off Hawaii, populations have been relatively healthy and even growing. But in the 1980s, researchers noticed an uptick in a disease called fibropapillomatosis (FP), which can cause massive tumors to grow on a turtle’s skin and face. Animal health specialists eventually linked the disease to a herpes virus, perhaps spread by parasites. Why some turtles were struck by FP while others remained healthy, however, remained a puzzle.

In an effort to get a better handle on the threat, three researchers with the National Oceanic and Atmospheric Administration’s Pacific Islands Fisheries Science Center decided to take a close look at the medical charts of nearly 4,000 turtles that had washed up dead or moribund on Hawaii’s beaches between 1982 and 2009. Then they looked for clues that might explain the distribution of the turtles with FP, examining links to everything from age to where the turtles lived and what they ate.

Although they were working with imperfect data, the researchers saw some intriguing patterns emerge from the numbers, they report in PLOS One. For example, the disease appears to strike subadult turtles the hardest, perhaps because adults develop immunity. More interesting, however, was that sick turtles were often found near landscapes with big “nitrogen footprints.” The nutrient, heavily used as a farm fertilizer and produced by sewage-treatment plants, often washes into near-shore waters, where it can fuel algal growth. Indeed, after 1950, invasive algae had begun to thrive in Hawaiian waters with high nutrient loads—and many green turtles had become dependent on the exotic plants for up to 90 percent of their food.

“The implications of this dietary shift may be profound,” write Kyle S. Van Houtan and his colleagues. That’s because the invasive algae store up nitrogen in their tissues, specifically in the amino acid arginine. And arginine, it turns out, “is specifically important for herpes viruses which are linked to FP tumors.” In particular, previous studies have found that the amino acid promotes eye-related tumors. “This is particularly relevant,” the authors note, because “93 percent of Hawaiian green turtles with FP have ocular tumors.”

Although the links between nitrogen pollution, turtle diet, and disease seem strong, the authors “urge interpretative caution,” since “many factors contribute to the course of an infectious disease.” Still, the sleuthing suggests that “environmental factors are significant in promoting FP” and that the role of nitrogen pollution—and arginine—in viral diseases is worth a closer look. ❧