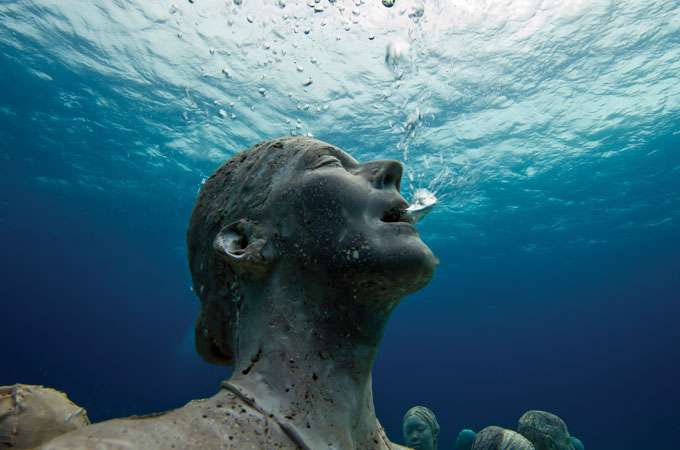 The sound of oceans warming

I’m always struck by how quiet ocean documentaries are. One hears the ghostly soundings of whales, of course, the eager pip of dolphins, the clacking of a crab’s claws. But invariably, as if to cover for an awkward and extended natural silence, the sound track swoops in, alternately dreamy and orchestral, with strings or harps or xylophones. In 1953 Cousteau called the ocean “the silent world”; six decades later, despite otherwise profound advances in cinematography, one would be forgiven for thinking he was right.

But in that time, science has come to understand that the sea brims with biological sound. Many—if not most—fish, for instance, communicate audibly. The croaker, the sea robin, and the sea trout seek mates and frighten enemies with honks and gurgles they produce with their swim bladders. The parrotfish, the garibaldi, the bar jack, and the scad grind their teeth with a rasping sound (think nails on chalkboard) to ward off intruders. The toadfish hoots like an owl, the cowfish barks like a dog; herring fart. The northern seahorse, in courtship, flicks a protuberance on its bony skull that clicks and snaps like a castanet. The black drum croaks so loudly in the canals of Florida that it can be heard through the ground and into the homes of nearby residents.

Blame our senses for the oversight. Slaves to light, we forget that the vast majority of sea life resides in darkness, below the photic zone, and can’t rely on visual clues. And sound behaves differently underwater. Although high-frequency noise quickly attenuates as the water absorbs it, low-frequency sounds, especially those between 10 to 200 Hz (roughly the range of the bass guitar; humans can hear frequencies up to 20,000 Hz), can travel far—even miles. Sometimes BBC video crews ask Stephen Simpson, a reef biologist at the University of Bristol, to lend them some reef sounds for a film they’re making. He regrets to tell them that he has no stereo recordings, which can be played through two separate audio channels and sound great in a movie theater; sound travels too fast underwater—five times faster than in air—to be audible in anything but mono. “It’s an alien acoustic environment,” Simpson says, “one we may not be ready for, I guess.”

Coral reefs are particularly loud. Some noise comes from the wind and breaking waves, but most is low-frequency fish chatter and the collective claw-clicking of snapping shrimp—which sounds “like heavy rain on a tin roof,” Simpson says, and can be loud enough to impede the use of military sonar. Put it all together, and you get “a pretty complex soundscape,” he notes. Indeed, Simpson has found that different reef habitats—barrier or fringing, mangrove or sandflat, pristine or degraded by sediment or overfishing—have different, identifiable audio signatures. Biologists traditionally study the health and diversity of reefs through visual surveys, which have their limitations—night, for instance. Lately, Simpson has begun thinking that reef noise could be a useful monitoring tool. One could record several reefs in a day, for a quick overview, or leave the recording equipment out for months to collect long-term data.

But reef noise isn’t a mere byproduct; it is instrumental in the reef’s very formation, Simpson has found. Biologists have long wondered how young reef fish, which are cast into the open ocean as tiny larvae, manage to find their home reef days or weeks later. In a neat experiment a few years ago, Simpson set up two light traps, one quiet and the other crackling with the piped-in sounds of reef fish and crustaceans. Larval fish were clearly more drawn to the latter. The reef noise is a homing beacon, Simpson says, “a roadmap that these organisms use to find their way.” In fact, reef fish are sensitive to sound even as embryos and become more sensitive to it, and in a wider range of frequencies, as they develop.

Nor is the phenomenon restricted to fish. Recently, Simpson and some colleagues working in the Caribbean found that many corals—mere flea-sized sacks of cells—orient themselves by sound before settling into a hardened station on the reef. They can choose a direction and go. “When the idea was first suggested, I thought it was pretty out there,” Simpson concedes. “Look at it: it’s a blob covered in hair cells, it doesn’t have a central nervous system, an auditory apparatus, or anything.” But, he notes, those hair cells, or cilia, are akin to those in our own inner ear, where, when waggled by vibrating particles, they help detect sound. The cilia on coral larvae may serve the same purpose; they may even be tuned to specific frequencies. In effect, every larva is an inside-out ear: the reef literally broadcasts itself into existence.

“Our instinct had been to assume that they’re pretty much pathetic,” Simpson says of the larvae. “But the more we learn, the more amazed we become. They can hear, smell, pick their habitats—they have control over their destiny.”

Up to a point, sadly. Even as scientists expand their appreciation for the sea’s natural sounds, they have grown troubled by the rising tide of human-made noise. The deafening effect of seismic and sonar blasts on dolphins and whales is well documented. But low-frequency noise has become more pervasive, too, especially near shore: more shipping traffic, more recreational boating, more underwater pile driving. One recent study off the California coast found that underwater sound levels at the lowest frequencies have increased by an order of magnitude since the 1960s.

How this aural fog might affect sea life is unclear. Could a rise in noise change where and how fish school, as traffic noise alters the flocking and nesting behavior of birds? Might it mask their ability to communicate, reproduce, seek prey, and avoid predators—or, in the case of young corals, find their home reefs and build upon them? Or might they learn to hear around it, the way we acclimate to a noisy air-conditioner or the background din of a cocktail party? “When it comes to the chronic effects of sound,” Simpson says, “nobody has any real solid evidence.”

Climate change will only raise the volume. As the ocean warms, it will become more acidic; that hinders animals like corals from forming carbonate shells. It also reduces the concentration of sound-absorbing chemicals like boric acid and magnesium sulfate, enabling low-frequency noise to travel farther, according to a recent study by Tatiana Ilyina of the University of Hawaii at Honolulu. “The ocean,” Ilyina writes, “is becoming transparent to sound.”

If that’s not enough, the ears of fishes may change, too. Fishes rely on the otolith, a carbonate structure in the ear, to orient themselves and sense their surroundings. But a study last year from the Scripps Institution of Oceanography found that white sea bass reared in carbon dioxide–rich water grow otoliths that are bigger than expected. It’s not yet clear if the size difference affects function, but symmetry does. In a separate study, Simpson recently found that reef fishes with asymmetrical otoliths have a harder time hearing the preferred sounds of their reef. Fish face a kind of tinnitus, from without and within.

The seas are in trouble. One need only watch a few minutes of video of the Deepwater oil disaster, streaming live courtesy of a remotely operated submersible vehicle, to grasp the scale of the harm we wreak. Through the artistry of film, we can marvel at the sea life whose grace and beauty we may soon forever miss. The shame—one of many—is that we may never hear it. ❧

ALAN BURDICK writes for numerous publications, including The New York Times Magazine, Harper’s, GQ, and Natural History. His first book, Out of Eden: An Odyssey of Ecological Invasion, was a finalist for the 2005 National Book Awards and won the Overseas Press Club award for environmental reporting.