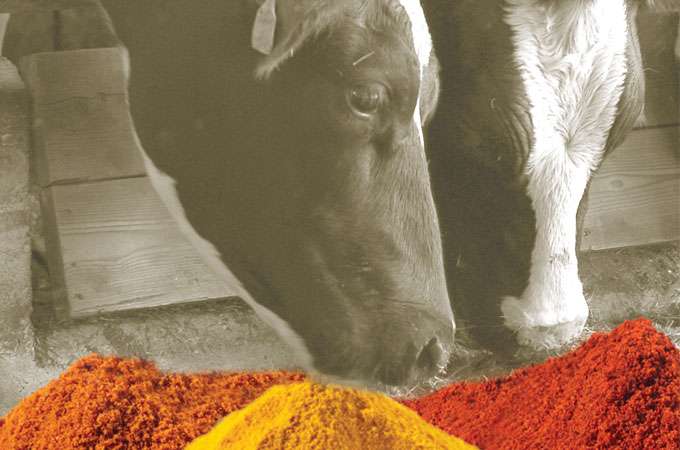 Cattle Feed with a Kick

A spicy diet knocks the wind out of methane emissions

“If we the humans can enjoy spices, why not animals as well?” asks Abdul Shakoor Chaudhry, a researcher at Newcastle University in the U.K.

There’s more than mere fine dining at stake in the question: Chaudhry says that adding curry spices to livestock feed could make a dent in global greenhouse-gas emissions.

In a study published last summer in the Asian-Australasian Journal of Animal Sciences, Chaudhry and graduate student Mohammad Mehedi Hassan added five different ground spices to fluid extracted from a sheep’s rumen. They then measured the amount of methane each solution—featuring cumin, coriander, clove, turmeric, or cinnamon—gave off. Compared to an unseasoned control solution, turmeric reduced methane production by 30 percent and coriander by 40 percent.

Methane is a greenhouse gas about 23 times as potent as carbon dioxide. And according to the U.N. Food and Agriculture Organization, livestock are responsible for 37 percent of all human-caused methane emissions—so reducing the amount of methane produced by cows and sheep could have a substantial global impact. “Methane is not only a problem for the environment, it’s also a problem for the farmer as well,” adds Mehedi. About 8 to 12 percent of the energy in livestock feed is lost to methane production.

So saying that spices reduce methane production is another way of saying that they make digestion more efficient—meaning better meat and milk yields for the farmer.

Antibiotics have also been used for this purpose, but the European Union banned this practice in 2006; it’s come under increasing scrutiny in the U.S. because of its role in promoting antibiotic-resistant bacteria.

The researchers believe that curry spices kill methane-producing bacteria in the rumen, and they encourage the growth of non–methane-producing strains. In fact, people have long used these spices in part because of their antiseptic properties.

The next step is to take these investigations from laboratory dishes to living organisms. In previous experiments, Chaudhry has found that the in vitro system is a good predictor of what goes on in real life, so he’s optimistic. “Even if we could get a fraction of that response, that would still be good,” he says. ❧