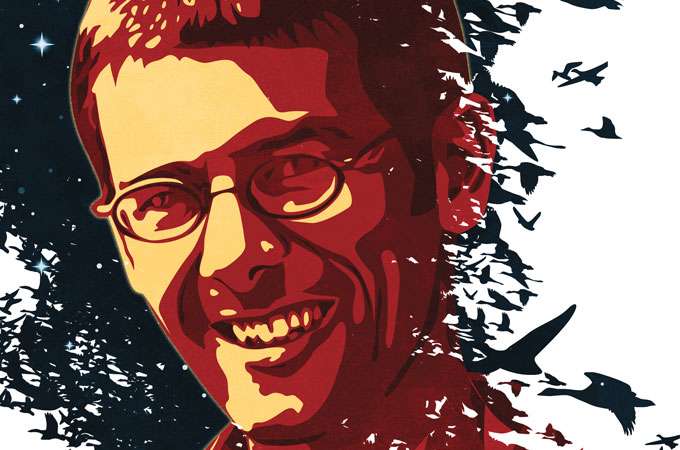 Martin Wikelski, the soft-spoken but relentless director of the ornithological station of Germany’s Max Planck Institute, spent decades gluing tracking tags to everything from dragonflies to fruit bats and then chasing after them in cars and planes. Now he dreams of using the International Space Station to track masses of migrants as they navigate the planet.

Lots of scientists track animals. How is your dream different?
The size and number of animals involved. If we studied thrushes, we wouldn’t tag just a few, but thousands—spread all over North America. The birds would carry tags that measured not just altitude and location but also wing beats per second, heart rates, brain waves, blood pressure . . . When the birds are in the air, we’ll use the information gathered by the tags to study lots of things.

Such as?
If something triggers a big die-off, we may find out quickly what happened. The birds could also help us track the spread of diseases that threaten humans, such as avian flu. There are many giant knowledge gaps—we don’t know how our migratory bird populations are regulated. By cold temperatures—is that how they die? Sparrow hawks? Disease? Or is it that they don’t have stopover places in the Midwest or the Gulf of Mexico anymore? We don’t have a clue.

Where will all this information go? I’m imagining a kind of “war room” with a big map . . .
I don’t know about a war room. But we have set up a limited version of the database . . . It’s called MoveBank—you can find it on the Web.

What would I see if I went to MoveBank right now?
You’d see almost-live feeds from the satellites that gather information sent from tags on larger animals—mountain pheasants in Bhutan, albatrosses in the Galápagos, monkeys in Panama. In the future, we’ll add other kinds of information—precipitation and cloud cover, for instance. We are also starting a project where we’ll link MoveBank to the systems used for forecasting tsunamis and earthquakes—disaster-forecasting systems. We test them against the movements of animals and see if the animals can do a better job.

Do we have the technology to pull this off?
The satellites used now are not sufficient, because they don’t work well with the small, lightweight tags we need for smaller animals. Right now, the lower limit for these tags is 5 grams, but we’ll need to make them lighter if we’re going to attach them to the smallest animals we hope to track.

Sounds expensive. What do you say to scientists who fear you will take funds away from their projects?
I don’t think this project will take funds away from anyone because there are so many potential commercial applications. Take the biomedical companies that use caged animals as models for the study of [human] diseases. One of the problems with that approach is that people don’t live in laboratories—we are field animals. These companies are sure to be interested in studying large numbers of tagged animals in the field—say, rats in New York, or opossums in Alabama.

You’ve said you want this project to “reconnect people with wildlife.” What do you mean?
People are so far from animals these days, they barely know what’s out there in their own back yard. But that will change if schools and local conservation groups help us capture, tag, and release the animals we will be tracking. That’s because our system will permit individuals to follow single animals around the world in near-real time. A person in a coffee shop might think, “Oh gee, I wonder where my blackbird is?” and find the answer on his cell phone.

So the tagged birds will be tweeting us?
Yes, in a way. We’re working on an app for that right now.