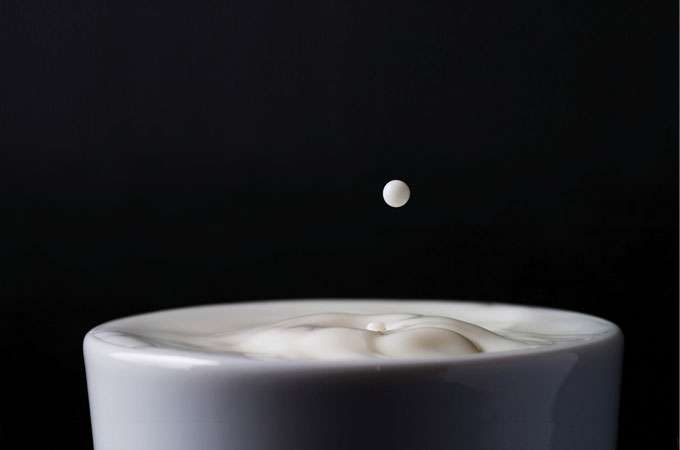 Biodegradable styrofoam with a dairy twist

There’s no use crying over spilled milk—just turn it into ecofriendly plastic instead. That’s the advice from David Schiraldi of Case Western Reserve University, who has developed a process to make a foam-like material using casein, milk’s most abundant protein, and sodium montmorillonite, a type of clay.

The method is environmentally friendly—its only byproduct is water vapor—and relies on widely available technologies. “It’s something you could almost do in your kitchen,” Schiraldi says.

First, whiz clay and water into a slurry in a blender. In another container, combine casein and water and mix with an eggbeater. Then fold the two liquids together and pour the mix into a mold (the research group gets a kick out of using penguin-shaped ice cube trays, to demonstrate the level of detail the stuff takes on). Flash-freeze, then freeze-dry to draw off the water, and cure in a low oven.

The resulting material “looks, feels, and probably tastes like Styrofoam™,” Schiraldi says. It costs more—milk is more expensive than the petroleum from which Styrofoam is made—but switching to milk-based packaging would add only about 50 cents to the cost of a computer.

An additional advantage is that, unlike many other “green” plastics (such as corn-based polylactic acid, used for disposable drinking cups), the casein-clay foam is biodegradable. About 20 percent of the material decomposed after just 18 days in a landfill, the team reported last year in the journal Biomacromolecules. Yet at room temperature, the foam remains intact for months.

Of course, milk isn’t the answer to all plastics. But Schiraldi estimates that the spoiled or surplus milk that’s currently wasted is enough to produce tens or even hundreds of millions of pounds of the foam per year.

A startup company, Aeroclay, Inc., is working on bringing the product to market. In addition to packaging for high-end electronics, other uses might include insulation for refrigerated shipping containers and perhaps applications in the building industry. “I think that this time next year we may have some early adopters,” predicts Schiraldi. ❧