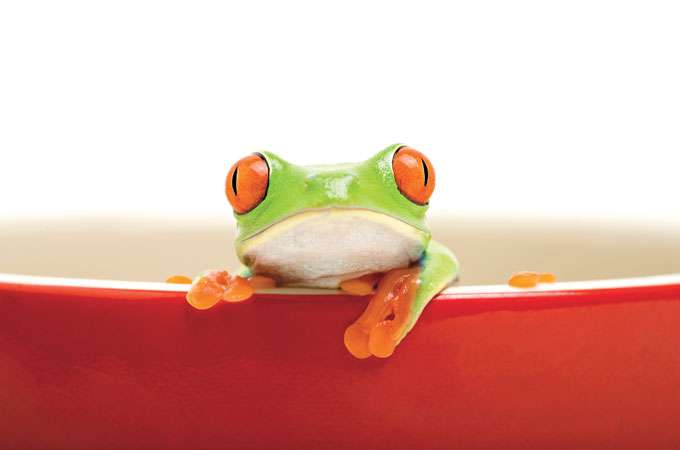 If you plunge a frog into boiling water, it will immediately jump out. But if you place the frog into cool water and slowly heat it to boiling, the frog won’t notice and will slowly cook to death. So claims the myth. Indeed, everyone—from corporate consultants to politicians to environmental activists—cites the frog fable as proof that people often don’t see change happening and cannot deal with it in the aftermath.

So how did this myth begin? Maybe it arose because frogs are cold-blooded. We humans are warm-blooded: our internal thermometers measure the local temperature, and then we shiver or sweat to maintain a body temperature of around 37 degrees Celsius. But a cold-blooded frog maintains the temperature of its immediate environment. Perhaps somebody once wrongly thought that this meant frogs had an inferior or inadequate thermometer.

Or perhaps the story began with E.W. Scripture, who wrote The New Psychology in 1897. He cited earlier German research: “. . . a live frog can actually be boiled without a movement if the water is heated slowly enough; in one experiment, the temperature was raised at the rate of 0.002 per second, and the frog was found dead at the end of 2.5 hours without having moved.

Well, the numbers just don’t seem right. If the water comes to a boil, that means a final temperature of 100 degrees Celsius. In that case, the frog would have to have been put into the water at 82 degrees Celsius. Surely, the frog would have died immediately. Scripture also wrote that the frog was found “without having moved.” How do you convince a frog not to move for more than two hours?

Then there’s the issue of the real-life behavior of frogs. First, a frog cannot jump out of boiling water. Remember the last time you dropped some egg white into boiling water: the proteins coagulated into a mess of thin, white strands. Unfortunately, the proteins in the frog’s skinny legs would do the same thing. So the frog in boiling water could not jump anywhere. It would die a nasty death.

Dr. George R. Zug, curator of reptiles and amphibians at the American Museum of Natural History in New York, and Professor Doug Melton of Harvard University both agree on this point.

Second, a frog would notice the water getting hot. Dr. Victor Hutchison, a herpetologist at the University of Oklahoma, has dealt with frogs throughout his professional life. Indeed, one of his current research interests is “the physiological ecology of thermal relations of amphibians and reptiles.” Professor Hutchison states, “The legend is entirely incorrect! The ‘critical thermal maxima’ of many species of frogs have been determined by several investigators. In this procedure, the water in which a frog is submerged is heated gradually at about 2 degrees Fahrenheit per minute. As the temperature of the water is gradually increased, the frog will eventually become more and more active in attempts to escape the heated water.”

So real-life experiments show that the frog-in-boiling-water story is wrong. If only this fact could make it into real life, too. ❧

DR. KARL KRUSZELNICKI is an Australian Science broadcaster and the author of 30 popular science books. For more info, visit: www.drkarl.com. This article was adapted from his book “It Ain’t necessarily So… Bro”