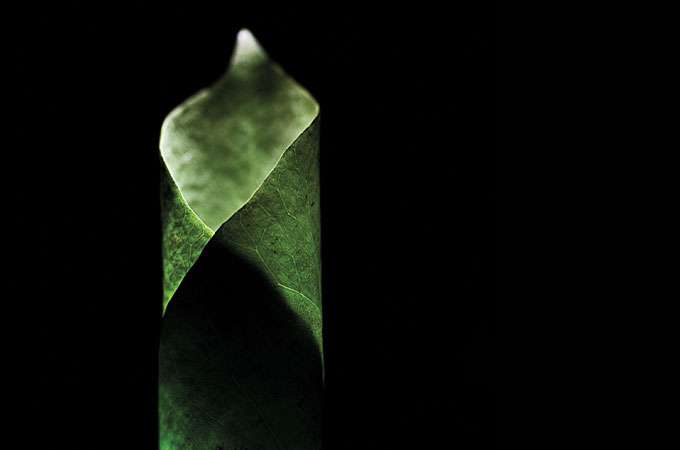 The golden glow of street lights could soon be replaced by the green fluorescence of tree leaves. Scientists from the Academia Sinica and the National Cheng Kung University in Taipei and Tainan have implanted glowing gold nanoparticles, known as bio–light emitting diodes, or bio-LEDs, inside the leaves of a plant.

The sea urchin–shaped nanoparticles are the key to turning a material that normally absorbs light into one that emits it. They could one day replace the electricity-powered street light with biologically powered light that removes CO2 from the atmosphere 24 hours a day.

Chlorophyll, the photosynthetic pigment that gives leaves their green color, absorbs certain wavelengths of light. However, under certain circumstances, such as being exposed to violet light, chlorophyll can also produce a light of its own. When exposed to light with a wavelength of about 400 nanometers, the normally green-colored chlorophyll glows red.

Violet light is hard to come by, though, especially at night—when glowing leaves would be useful to drivers and pedestrians. The scientists needed a source of violet light, and they found it in the gold nanoparticles.

When shorter wavelengths of light, invisible to the human eye, hit the gold nanoparticles, they get excited and start to glow violet. That violet light strikes the nearby chlorophyll molecules, exciting them, and the chlorophyll then produces the red light.

The scientists, who reported their work in the journal Nanoscale, hope that trees treated with gold nanoparticles will produce enough light to replace electric street lights. For now, however, the effect is limited to the scientists’ test subject, the aquatic plant Bacopa caroliniana. Expanding to terrestrial plants should be possible, said Krishanu Ray of the University of Maryland. “But that’s a long way away.” ❧