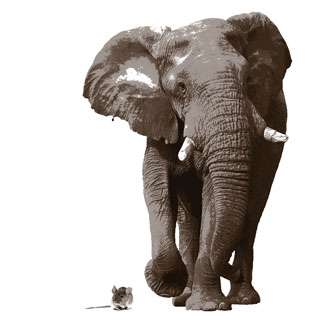 In 1883, German physiologist Max Rubner pondered why large mammals and birds typically live longer than small ones. He offered a “rate-of-living” explanation that linked body size to metabolic rate. In essence, small animals live fast and die young because they have high metabolic rates, he theorized, while big ones burn the candle more slowly.

In the 1930s, Swiss-born physiologist Max Kleiber refined the theory, showing that an animal’s metabolic rate is proportional to the 3/4 power of its mass. Thus, under Kleiber’s Law, a cat that is 100 times heavier than the mouse in its jaws has a metabolism that is 31 times faster. Likewise, a chicken’s heart beats about ten times faster than an elephant’s. Kleiber’s Law also suggests that both the big and little hearts will give out after about the same number of beats: a million or so.

<< Return to Shrink to Fit