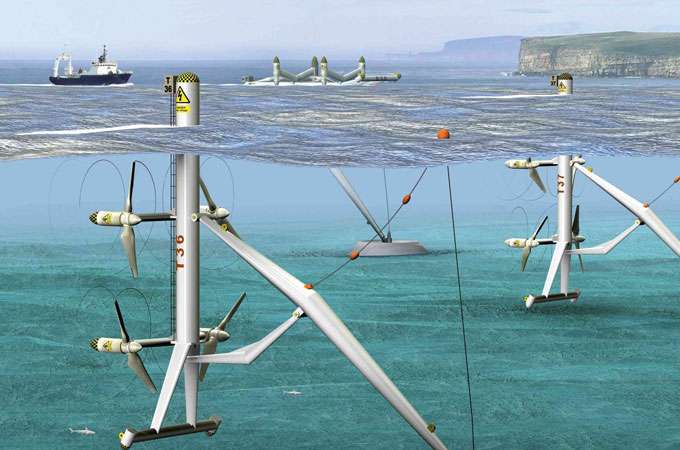 Plugging into the Ocean

The ecological tradeoffs of scaling up blue power

Crashing surf and surging currents make for dramatic seaside scenery. These high-energy environments are also increasingly eyed for producing electricity—a trend that highlights the need for more study of the ecological implications of ocean-energy projects, argues a new study.

Engineers have come up with a variety of promising ways to turn ocean waves and currents into power, from bobbing buoys to submerged “tide turbines.” So far, however, most “marine renewable energy installations” (MREIs) are still in the demonstration phase, with just one or two installed devices. But bigger projects, including arrays of up to 100 devices, are on the drawing boards. And the “potential ecological implications associated with a single device will be very different from that of a large array,” a team led by Mark A. Shields of the University of Aberdeen in the U.K. notes in Ocean and Coastal Management.

Ecologically, projects could have both benefits and costs, the researchers note. The foundations, steel frames, and cables associated with MREIs could become “artificial reefs” that give marine creatures new living space. But since the devices depend on extracting kinetic energy from moving water, arrays could also influence wave heights, current speeds, and the distribution of sediment and larval animals.

And that could spell trouble for shellfish, seaweeds, and other marine organisms specially adapted to cope with “extreme hydrodynamic forces. “Computer models, for instance, have suggested that mooring 270 wave-energy devices off the coast of Portugal could reduce nearby wave heights by five centimeters. While that may not seem like much, it could change how often intertidal habitats are splashed by seawater, altering important sediment flows. Projects could also redirect currents that carry seeds, propagules, and young organisms to nursery grounds.

Often, however, the potential impacts aren’t clear. That’s because, for most sites, “environmental and physical conditions are poorly understood, largely due to the logistical difficulties associated with sampling in dynamic marine environments.” ❧