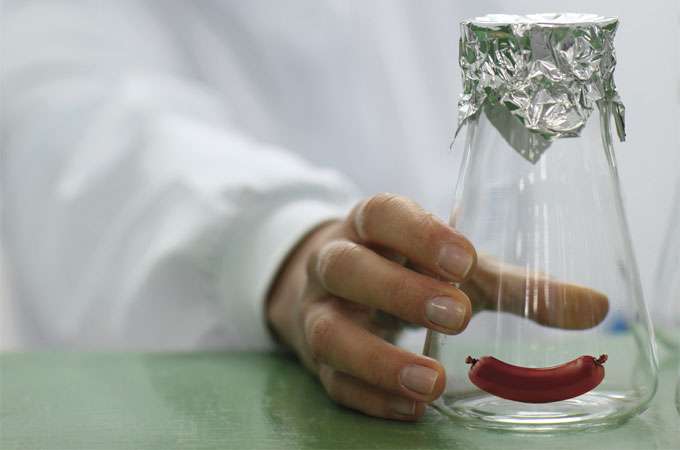 Pork in a Petri

Stem-cell technology spurs the advent of in vitro meat

Mark Post has never been tempted to taste the “fake” pork that he grows in his lab. As far as he knows, the only person who has swallowed a strip of the pale, limp muscle tissue is a Russian TV journalist who visited the lab this year to film its work. “He just took it with tweezers out of the culture dish and stuffed it in his mouth before I could say anything,” says Post. “He said it was chewy and tasteless.”

Post, who works at the Eindhoven University of Technology in the Netherlands, is at the leading edge of efforts to make in vitro meat by growing animal muscle cells in a dish. His ultimate goal is to help rid the world of the wasteful production of farm animals for food by helping to develop life-like steaks. In the near term, he hopes to make a single palatable sausage of ground pork, showcased next to the living pig that donated its starter cells—if he can secure funds for his research.

Post started out as a tissue engineer interested in turning stem cells into human muscle for use in reconstructive surgery, but he switched to meat a few years ago. “I realized this could have much greater impact than any of the medical work I’d been doing over 20 years—in terms of environmental benefits, health benefits, benefits against world starvation,” he says. Largely because of the inefficiency of growing crops to feed livestock, a vegetarian diet requires only 35 percent as much water and 40 percent as much energy as that of a meat-eater. Future “in-vitrotarians” should be able to claim similar savings.

In the Netherlands, where the vast majority of work has been done so far, a consortium of researchers convinced the government to grant them US$2.6 million between 2005 and 2009 for developing in vitro meat.

Post estimates that creating his single sausage will require another year of research and at least $250,000.

The first question for researchers is which cells to start with. Most work so far has been on myosatellite cells, the adult stem cells responsible for muscle growth and repair. These can be obtained by a relatively harmless muscle biopsy from a pig, cow, sheep, chicken, or turkey; the desired cells are then extracted using enzymes or pipetting and multiplied in culture.

The fundamental problem is that myosatellite cells will divide only a limited number of times, probably because their telomeres—the protective ends of the chromosomes—wear down with age.

For now, Post uses regular cell-culture medium to grow his pork myosatellite cells. This contains fetal calf serum, which—because it currently comes from dead cows—largely defeats the point of synthetic meat. It also contains antibiotics and antifungal agents that might not be good for human consumption. “Supposedly, you could be allergic to these; you never know,” Post says. To get the cells to differentiate into muscle, he shifts to horse serum, which has the same list of problems. No one has yet developed a way of making a cheap, animal-free growth serum in large quantities.

Myosatellite cells grown on a scaffold will fuse into myofibers, which then bundle together to make up muscle. But lab-assembled muscles are weak and without texture. “It’s like when you take off a cast after six weeks,” says Post. To get the muscle to bulk up with protein requires exercise. Assembling the myofibers between anchor points helps, as this creates a natural tension for the muscle to flex against. Post uses this type of arrangement to boost the protein content of a muscle strip from 100 milligrams to about 800 milligrams over a few weeks.

If lab-grown muscle gets more than about 200 micrometers thick, cells in the interior start to die as they become starved of nutrients and oxygen. Post simply grows many small strips that could be ground up into a sausage.

The thing that enthusiasts for fake meat talk least about is its taste, perhaps because they haven’t tried it. In the U.S., researchers have largely avoided eating anything grown in the lab for fear of violating a Food and Drug Administration regulation (it’s unclear whether it is actually forbidden) or of being seen as publicity hounds.
Researchers generally believe that, if they can get the texture right, taste will follow—particularly once flavoring is added. Fortunately, myosatellite cells can also turn into fat, which would add to the taste.

Researchers such as Post believe that the scientific and technical advances needed to make and sell in vitro meat are worth the fight—but convincing funders remains the biggest obstacle. Post’s support from the Dutch government ran out in 2009; he came out of that with hundreds of pork strips, not the thousands he needs for a sausage. ❧