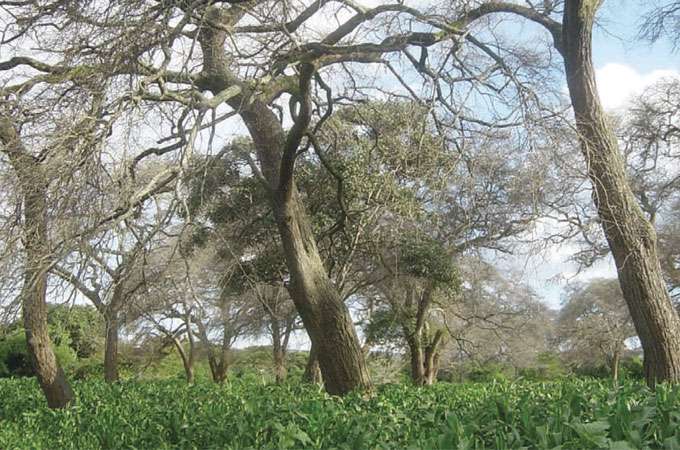 Imagine a breakthrough that creates free fertilizer, allows poor farmers to increase yields while conserving land, and is not only carbon-neutral but actually absorbs CO2.

What is this amazing innovation? Dennis Garrity likes to call it a tree. “This is quite a novel concept,” he says. “In the future, we may see agriculture occurring under a canopy of trees.”

Garrity, head of the World Agroforestry Centre in Nairobi, is the leading authority on an emerging strategy called “evergreen agriculture.” The idea is to plant trees around farm fields—trees with an opposite growing season to neighboring agriculture. (“Evergreen” refers to sustainability rather than the trees, which—ironically—are deciduous). When the fields are bare, the tree leafs out, sucking nitrogen and CO2 from the air. When the crops start to grow, those leaves are dropped as the perfect free fertilizer while the crops absorb the light.

In Malawi—one of the poorest countries in Africa—having trees looming over corn increased output by an astounding 280 percent. But elsewhere, yields can vary from six to 200 percent—depending on soil fertility, age and density of trees, and weather conditions.

Garrity says the trees can’t completely replace commercial fertilizers, but they do provide a cheap and beneficial alternative in a region where farmers apply only six percent of the fertilizer used by their American counterparts.

Third-world farmers are understandably wary of silver-bullet fixes. While the Green Revolution of the twentieth century was a boon for those who could afford new fertilizers and specialty seeds, it drove small growers in much of the world to ruin. However, Garrity says, evergreen agriculture was actually adapted from long-standing practices in the arid Sahel and is winning converts such as Nobel laureate Wangari Maathai.