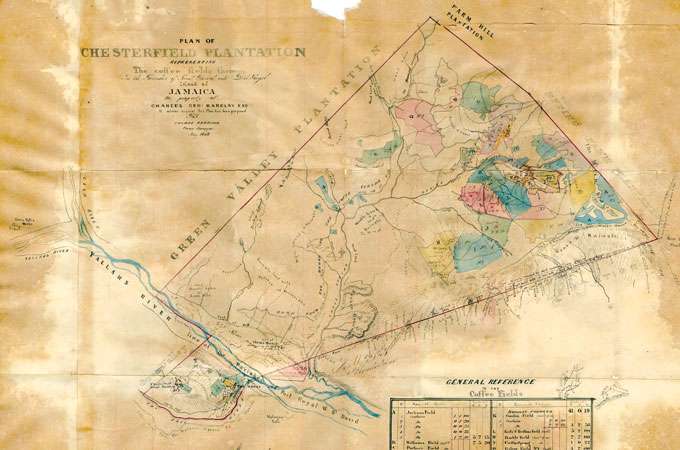 A priceless set of historic maps is giving ecologists unique insights into how tropical forests bounce back from past damage—and just how useful these “second-growth” forests might be for preserving biodiversity. It’s a tale that rests on coffee, a bloody slave rebellion, and a helpful bodyguard.

In the 1790s, growing demand for a cup of java prompted eager entrepreneurs to transform vast swaths of Jamaica’s pristine forest into coffee plantations tended by thousands of slaves. Soon, Jamaica produced one-third of the world’s coffee. In the 1830s, however, the boom gave way to bust—due to massive soil erosion, the end of beneficial trade agreements, and a slave uprising that left thousands dead. By 1847, planters had abandoned 465 coffee plantations covering more than 76,000 hectares, ecologists Shauna-Lee Chai and Edmund V.J. Tanner of the University of Cambridge in the U.K. report in the Journal of Ecology.

That history came to life for Tanner, who has worked in Jamaica for decades, after he learned that the island nation’s National Library held carefully drawn surveys of the old plantations. The maps, some of which were made 170 years ago, offered an unusual opportunity to get a long-term look at how one important type of tropical forest—mountain rainforests—recovered from disturbance. Similar studies from Puerto Rico rested on land-use records that went back just 80 years, Tanner notes, “so these surveys essentially doubled the period over which we could look back—and that’s a major extension.”

The maps enabled Chai, a graduate student from Jamaica, to figure out which parts of five old plantations in the island’s Blue Mountain chain had been cleared for coffee and which had been left covered with forest. “Those surveys had more detail than the modern maps,” she says. Then, in what Tanner calls “some really excellent field work,” Chai measured and identified more than 700 trees along eight 200 meter–long transects that crossed both abandoned coffee fields and old-growth forest. “I’m a tree hugger now,” she says. “I had to wrap my arms around a lot of those trees to measure them.”

The extremely rugged, mosquito-infested terrain was a challenge, she adds—but not the only one. Chai was accompanied by a bodyguard of sorts, a forest ranger from the nonprofit Jamaica Conservation and Development Trust who made sure she didn’t run afoul of the remote area’s outlaws. And she kept in touch with local residents, “who knew where a gunman might be hiding,” she says.

The work paid off with a wealth of data showing that the forests were recovering from the colonial coffee boom. Overall, the second-growth and old forests were similar—with one noticeable difference: the old-growth forests had a higher percentage of “endemic” trees, or species native only to the region. “Our study indicates the importance of old-growth forests in maintaining the high plant endem-ism for which Jamaica and the wider Caribbean are noted,” Chai and Tanner write. They estimate it could take 200 years or longer for the new forests “to fully recover original composition, even when there are adjacent old-growth forests to act as a seed source.”

That’s perhaps good news for efforts to protect forest biodiversity in some tropical nations which are seeing forests regrow as rural populations abandon farms and move to cities. In Puerto Rico, for instance, there has been a 30 percent increase in forest area over the past 50 years. And Tanner wonders whether there might be similar historical maps tucked away in some of those nations. “If people look for them,” he says, “they could provide us with a whole heap of understanding of the value of secondary forests.” ❧