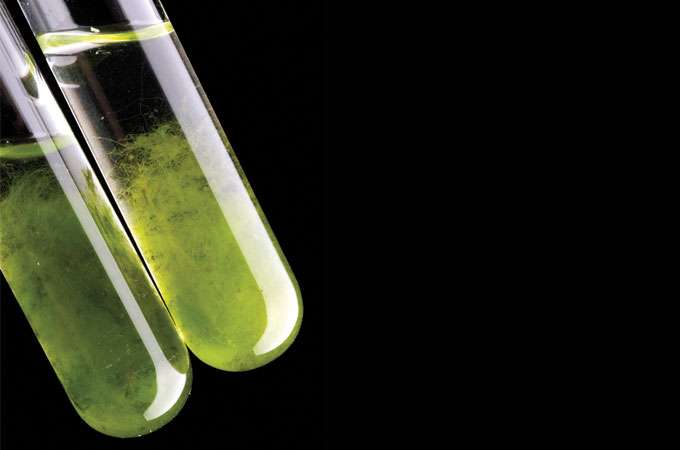 Algae can treat your wastewater and then fill up your tank

Just what are algae capable of? According to researchers at the Rochester Institute of Technology, just about anything short of mixing a cocktail. They can clean your wastewater, fuel up your car, and then help grow a fish for your dinner.

Associate professor of biological sciences Jeff Lodge says his team of researchers initially had more modest aspirations: they were interested in producing biodiesel from algae and were looking for a cheaper source of nutrients to grow the algae. Other researchers had previously grown algae in wastewater from dairy farms, and municipal wastewater seemed worth a try as well.

“And we found out our algae just love it,” Lodge says of the wastewater from two nearby municipal treatment plants. “Then it just kind of struck us, well, what are they doing to the wastewater?”

The team measured the nutrient levels in the water and found that after about three days of growth, the algae remove virtually all of the undesirable compounds such as ammonia, phosphate, and nitrate. In addition, they deplete carbon dioxide from the water, which raises the pH—and kills off pathogens.

To carry out the treatment, the researchers simply add algae to a tank or pond of wastewater and wait. The approach probably wouldn’t be suitable for large, urban plants that must rapidly process high volumes of water. But it could be helpful in rural communities, especially where rapid exurban growth is straining the capacity of existing plants. And since it requires minimal infrastructure, it could also be used in poorer countries where wastewater treatment is currently lacking.

After a few days, the team pumps the water out of the tanks, dries out the algae, and then processes the algae to remove the lipids—the raw material for biodiesel. The rest of the algae biomass can be used in aquaculture, burned in a biodigester to produce methane, or converted into ethanol. None of these ideas is entirely new, but the team has combined a number of existing green technologies in a tidy, cradle-to-cradle system. “We’re using the whole algae for everything and there’s no waste at all,” Lodge says.