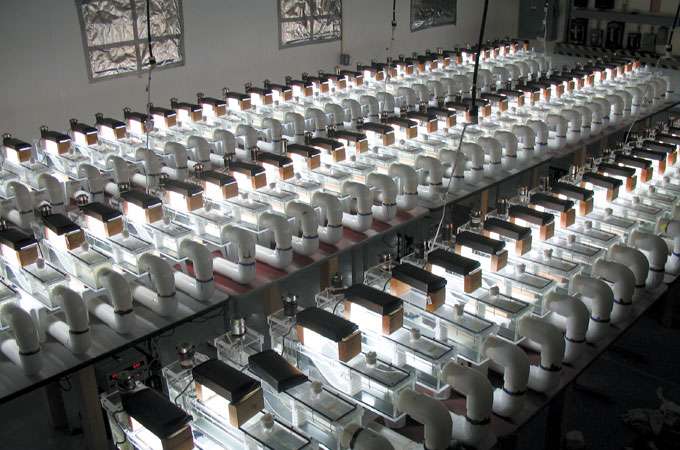 A Room Full of Mini-rivers

Sometimes, one river isn’t enough. That’s why Bradley Cardinale built 150. In an experiment that colleagues are hailing as “elegant,” the University of Michigan biologist used dozens of small artificial streams to prove a point: more biodiversity can mean less pollution.

Past studies have suggested that ecosystems with more plant species tend to remove more pollutants from soil and water than those with fewer—but the exact mechanism wasn’t clear. In a bid to clarify matters, Cardinale explored how biodiversity affected efforts to remove one common water pollutant: nitrogen, a nutrient that has become a major problem worldwide. In each of his lab streams, Cardinale grew different combinations of eight common kinds of diatoms and algae. He also varied how fast the water flowed in his mini-rivers to create different ecological “niches.” Fast flows, for example, favored diatoms that liked riffles, while slow-moving water favored those that prospered in pools. After about two months, he ended up with stream ecosystems composed of one to eight species in various population sizes.

More species turned out to be better for removing a nitrogen compound called nitrate, he reports in Nature. An eight-species mix, for instance, removed nitrate from water an average of 4.5 times faster than did a single species.

Researchers might not see such dramatic differences in natural rivers, Cardinale warns. Still, the findings provide the first “solid evidence of a cause-and-effect relationship between biodiversity and water quality.” They also expose a potential chicken-and-egg challenge, he adds: since nitrogen pollution tends to reduce the very species diversity that can help neutralize the nutrient, it will be critical to take action before nutrients overwhelm a river and tip it into a kind of ecological death spiral that could be hard to escape.