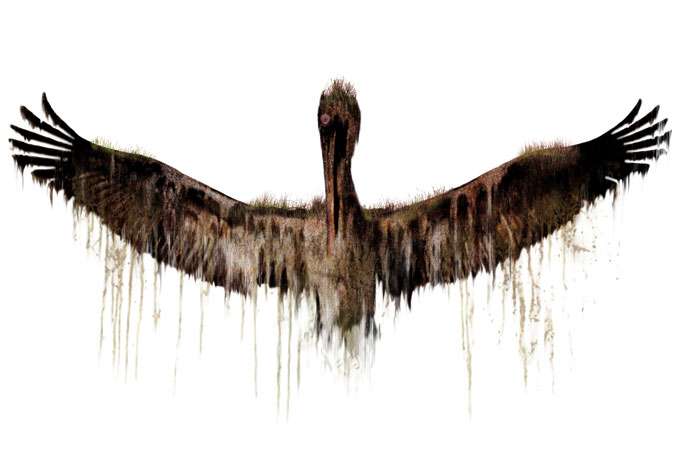 A Sea in Flames:
The Deepwater Horizon Oil Blowout
By Carl Safina
Crown, 2011

Little more than a year has passed since the BP drill rig Deepwater Horizon exploded and sank in the Gulf of Mexico about 60 miles off the Louisiana coast. Gone are the dashed-off Tweets, the frothing blogs, and the articles hammered out on deadline—and in has come a new crop of books on the disaster. Writing a book allows an author a bit more time to let ideas marinate, to consider a range of sources, and to make connections that might have been overlooked. As a result, the author can offer new insights or, in notable cases, even wisdom.

One such author is Carl Safina. In the immediate aftermath of the blowout, Safina spent several weeks in and around the Gulf, boating through mired marshes and driving across parishes, talking with stunned residents—all the while nursing his own raw feelings. He divides the resulting account, A Sea in Flames, into three sections: “Disaster Chain,” “A Season of Anguish,” and “Aftermath.” Think of these as his stages of grief. 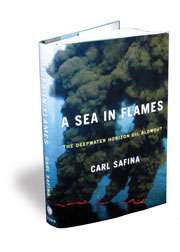 In the beginning, he is irate. Enraged. Confused. A writer noted for his lyricism, he is shocked into a truncated, almost shotgun syntax. And as he gropes for ways to explain the details of the spill, the metaphors fall thick and fast. Deep-sea oil drilling is likened at one point to a difficult pregnancy, the mother-to-be about to give birth to a carbonated beverage of oil and natural gas, the extraction of which is made all the riskier when BP decides to pull its star quarterback out of the playoff game in the fourth quarter—right as they get a flat tire.

This sense of discombobulation is precisely Safina’s point: everyone was fumbling in the dark. Safina does not bother to go back and temper his early responses, several of which turn out to be unfair—if not outright wrong. And when it becomes clear that the predicted apocalypse might not actually come to pass—that the Gulf is in fact quite resilient if left to care for itself—his initial rage and anguish cool. One sad irony, Safina points out, is that thanks to fisheries closures, some fish populations actually increased in the wake of the spill.

Safina brings the reader with him as his feelings evolve. The most telling change in the tenor of the narrative happens when Safina sits down with NOAA Administrator Jane Lubchenco and U.S. Coast Guard Admiral Thad Allen, who coordinated the federal response to the spill. Neither has fared well in the book up to this point, especially Allen. From the outset, Safina referred to him derisively as the “Thadmiral” and lost no opportunity to heap scorn on the mealy pronouncements and perceived kowtowing to BP. But given a chance to put his sound bites into context, Allen is no longer a caricature. The delays that Safina first saw as bureaucratic incompetence were instead, Allen explains, prudent caution. Capping a gushing well at such a depth was an unprecedented exercise. Slowness may have been excruciating; failure would have been catastrophic.

In the end, Safina tries to offer some consolation along with a dose of hope. But it is hope with an odd, twisted edge. The Gulf was “hardly a pristine Eden,” Safina writes. Whatever harm the BP/Transocean/Halliburton oil may have done, it is doubled and tripled every year as pollutants stream unabated out of the Mississippi, as hundreds of square miles of marsh are lost, and as a summer dead zone grows bigger and bigger. Still, marine and estuarine life has somehow managed to persist in the face of continuous insult, which leads to another point. To mock and blame Tony Hayward, the former CEO of BP, is to skip over the real culprit: those of us addicted to fossil fuels. “The real catastrophe,” Safina writes, “is the oil we don’t spill.”

Until we wean ourselves of the stuff, we might have to get used to images such as those from the Gulf. Barely a year later, Shell Oil is lobbying to drill exploratory wells in the Arctic, and company representatives are assuring federal regulators that they are prepared to respond to the highly unlikely event of a blowout.

The Deepwater Horizon blowout was hardly the first oil spill, and given the complexity and risk involved, it most certainly won’t be the last. History may repeat itself: the first time as tragedy, the second as farce. But what about the third time, or the fourth time, or the fifth? Or the times after that? What about then? Those insights will be harder to come by. ♣