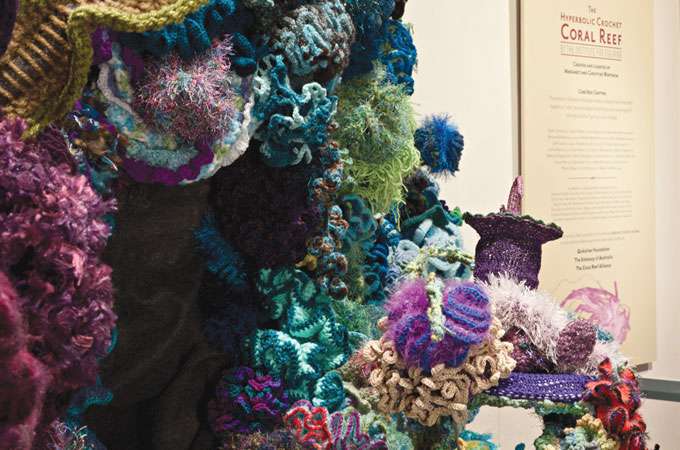 The “Hyperbolic Crochet Coral Reef,” a unique exhibition and thought-provoking fusion of science, conservation, mathematics, and art, was recently on display in Washington, D.C., at the Smithsonian’s National Museum of Natural History. By engaging local communities to crochet coral reefs, the exhibition celebrates the reefs’ beautiful diversity and speaks to the urgent need to protect these vanishing ecosystems.

Shocked by the accelerating demise of corals around the globe, reef curators Margaret and Christine Wertheim of the Institute for Figuring took action, deciding to tell the story of coral reefs—their beauty and the threats they face—through crochet.

As the name suggests, the Hyperbolic Crochet Coral Reef also incorporates the world of mathematics. Throughout the ocean, the diverse forms of kelps, corals, and sea slugs are variations of a geometric form known as hyperbolic space. Mathematicians had long believed this type of geometry was impossible to represent physically, even though it has existed within nature for hundreds of millions of years. Finally, in 1997, Cornell University’s Daina Taimina realized that models of hyperbolic space could be created using crochet—a discovery that astonished the mathematical world.

The Wertheims, inspired by the Great Barrier Reef in their native Queensland, Australia, harnessed this discovery and started crocheting a coral reef. For the past five years, they have been working with communities all over the world to build a global network of crochet reefs that has become an ongoing collective experiment. Since the project began, satellite reefs have been created in Chicago; New York; London; Dublin; Sydney; Scottsdale, Arizona; and Riga, Latvia. The participation of such a vast variety of communities has created a collection of crocheted corals as distinctive and diverse as their living counterparts.

“Woolliness and wetness aren’t exactly two concepts that you would initially pair together, but now this project reaches across five continents and has roots that extend into the fields of mathematics, marine biology, feminine handicraft, and environmental activism,” said co-creator Margaret Wertheim. “It’s taken on a viral dimension of its own, and in a beautiful way the development of the project parallels the evolution of life on Earth.”

Volunteers crocheted enthusiastically throughout the summer of 2010 to produce the 10-by-16-foot reef that is displayed together with the Hyperbolic Crochet Coral Reef exhibition.