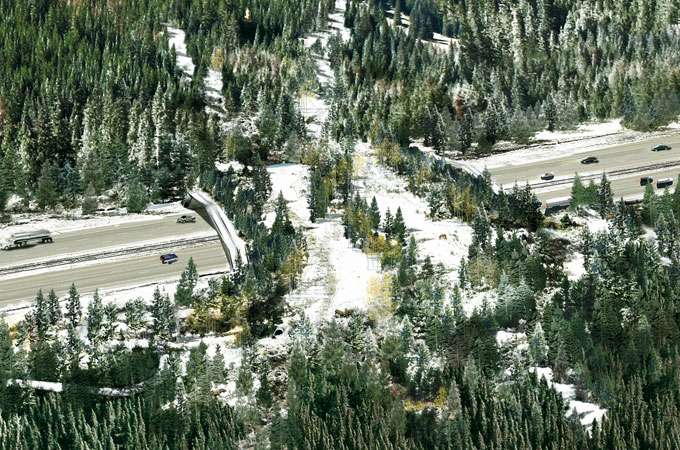 Every year, more than 1 million collisions between vehicles and large mammals occur on U.S. roadways. The result is tens of thousands of human injuries and billions of dollars in property damage—not to mention the deadly toll on wildlife, including many rare species. Current attempts to keep animals off the road consist of ineffective tunnels or heavy structures costing up to $15 million and resembling vehicle overpasses.

The ARC International Wildlife Crossing Infrastructure Competition set out to change this with a contest to spur innovation in the spirit of the X PRIZE. Offering a $40,000 award, it challenged landscape architects, engineers, and ecologists to devise an ecologically more sensitive, cost-effective, and beautiful wildlife bridge. Of the 36 teams from nine countries that entered, a group of engineers and landscape architects from HNTB and Michael Van Valkenburgh Associates in New York took the prize.

The football field–sized crossing they designed for West Vail Pass in Colorado condenses multiple habitat types (from open meadow to subalpine forest) into “lanes” that attract different species. By extending vegetation from the surrounding areas onto the structure, the winning design blends seamlessly into the environment.

Further, HNTB and MVVA’s plan calls for lightweight modular components that can be quickly adapted to, and constructed in, different settings. The structure can be built for approximately half the cost per square foot of existing bridges, according to the Western Transportation Institute, a competition sponsor.

ARC’s vision of distinctive wildlife crossings shone through in the contest finalists’ designs. The entry from Janet Rosenberg + Associates (Toronto), for example, envisioned a red structure; target species perceive it as gray, while the bold color draws the public’s attention. Some went beyond merely reconnecting fragmented habitat, proposing public viewing platforms that reconnect people with wildlife as the animals safely roam.