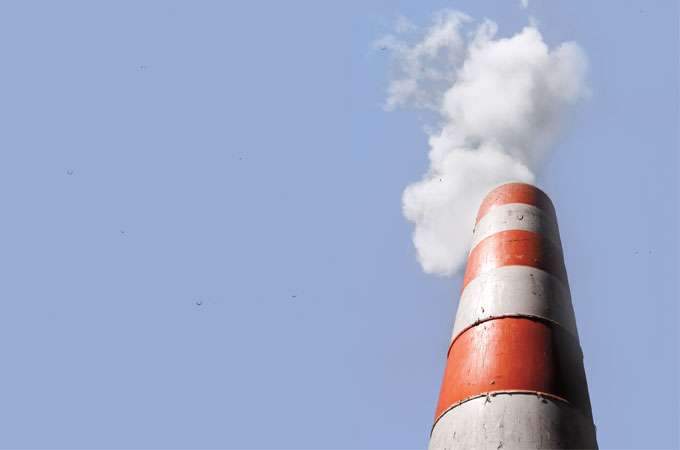 Increased carbon dioxide in the air also increases carbon dioxide dissolved in the ocean. There it forms carbonic acid, causing ocean acidification. Eventually, this acid is neutralized as it comes into contact with calcium carbonate rocks and sediments. This reaction yields calcium bicarbonate, a form in which carbon can remain sequestered for the long term.

“In the long scheme of things, any amount of carbon dioxide that we emit is going to be absorbed” through this or a similar process involving silicate rock, says Rau, a scientist at the University of California at Santa Cruz and the Lawrence Livermore National Laboratory.

But that takes tens of thousands of years, and we humans—let alone the rest of the biosphere—don’t have that long to wait. Rau wants to speed up the process by bubbling carbon dioxide–rich gas emitted by power plants through a device called a limestone scrubber, essentially carbonate rock submerged in water. “The idea is simply to do this weathering, in effect, right in the smokestack of the power plant,” he says.

In a laboratory-scale experiment, this method removed 97 percent of the carbon dioxide from a simulated power-plant smokestack, Rau reported earlier this year in Environmental Science and Technology. (1)

Some power plants already have limestone scrubbers installed in their smokestacks, to remove sulfur dioxide. That process generates carbon dioxide, but Rau says the same apparatus could also be used to sequester it.

Even better, when the resulting bicarbonate-enriched water is pumped back into the sea, it could benefit the creatures that dwell there. Saltwater-aquarium enthusiasts use a similar process to increase calcium bicarbonate and alkalinity in their tanks, helping their corals and shellfish to form shells. In fact, the plastic tubes Rau used in his experiment to replicate a smokestack were bought from an aquarium-supply house. “Instead of reinventing the wheel, I went on the Web,” he quips.

The process is probably most suited to combating emissions at coastal power plants, since transporting limestone and seawater long distances wouldn’t be cost-effective. Rau is currently looking for funding and partners for a pilot project using the process in a working power plant.