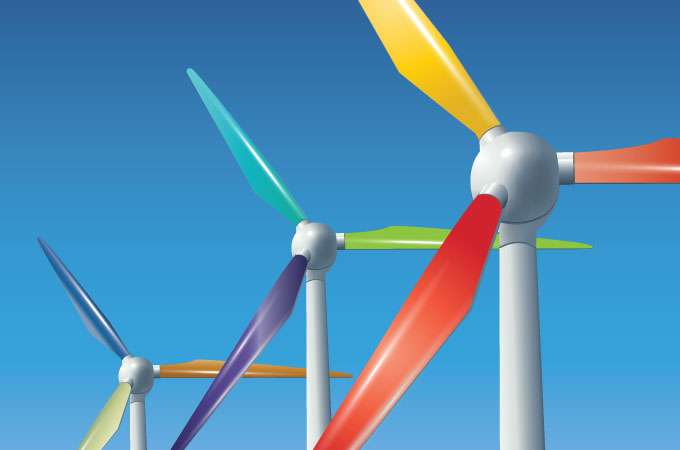 Wind-turbine color is a life-or-death matter

The evidence isn’t black and white, but paint color could be contributing to wildlife kills at the world’s growing number of wind turbines. Field experiments in the U.K. suggest that common turbine hues attract insects, and the buzzing food supply might in turn lure hungry birds and bats too close to the whirling blades.

A few studies have suggested that insects could be attracted to turbines by their color or by the amount of ultraviolet (UV) light they reflect (many insects see in the UV spectrum). But the idea hadn’t been rigorously tested until researchers at Loughborough University in Leicestershire decided to take paint chips in hand.

On 59 occasions over three years, they displayed ten differently colored cards at a wind turbine located in a meadow near the university, both at mid-day and after sunset. The colors ranged from two common shades used to make wind turbines less obtrusive—“pure white” and “light gray”—to racier shades that might be more  attractive to insects: “red lilac,” “traffic yellow,” and “opal green.” Each time, they counted how many insects landed on each card during a ten-minute window. By the end of the experiment, they had counted 2,012 insect visits to the cards.

And discriminating insects they were. The pollen-like yellow card proved to be “the most attractive overall,” while purple was the least popular, the researchers report in the European Journal of Wildlife Research. Also high on the list, however, were the common turbine shades of white and gray, although “it is not entirely clear why.” One possibility is that the paint’s UV signature resembles that of light reflected by leaves and flowers, and the insects “are drawn to it for foraging, mating, or resting opportunities.”

The findings suggest wind-farm builders might want to “consider alternative turbine colors for future installations, particularly in areas known to be high in insectivore activity,” they conclude. But “a logical next step would be to paint turbines at known sites of wildlife interaction” to investigate the effect of “moving” colors. Ultimately, the researchers hope, such studies will make picking the right palette for a wind farm more than just a matter of taste.