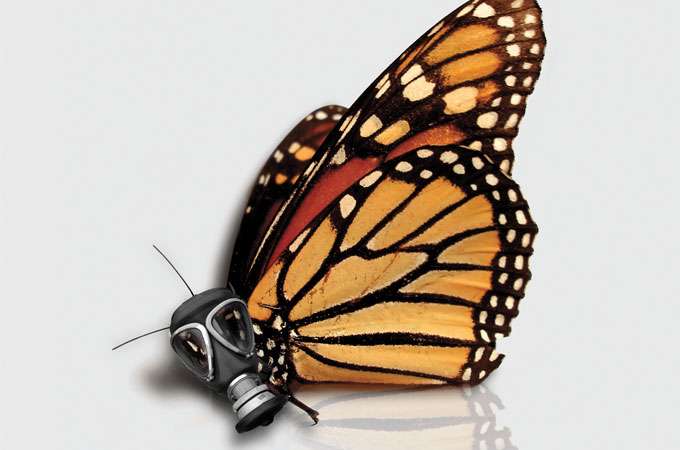 In the winter of 2009–2010, researchers recorded the smallest clusters of overwintering monarchs seen in the 17 years they have collected data, a multinational research team reports in Insect Conservation and Diversity. Each winter since 1994–95, they have tallied the total area covered by the insects, millions of which travel to northern Mexico each year to cling to trees in forests on a few mountainsides. Overall, the butterflies have occupied an average of 7.24 hectares since the count started, with a high of 20.97 hectares in 1996–97 and a low of 1.92 hectares in 2009–10. Last winter (2010–11), the total rose to 4.01 hectares. Still, the trend isn’t promising. Over the full 17 years, “the decline is statistically significant,” the authors note.

“Three factors appear to have contributed to reduce monarch abundance,” they note:

1. Extensive illegal logging in the overwintering forests, despite the creation of monarch reserves. “For example, between 1971 and 1999, 44 percent of the high-quality overwintering forest was degraded within the area that became protected as the Monarch Butterfly Special Biosphere Reserve by presidential decree in 1986.”

2. The loss of breeding habitat in the U.S. due to the expansion of genetically modified crops that resist herbicides, which led to the widespread loss of the milkweed plants on which the butterflies lay eggs.

3. Severe weather. Researchers estimate that a cold, five-day rainstorm in 2009–10, for instance, may have killed up to 50 percent of overwintering monarchs.

The problems, the authors conclude, “call into question the long-term survival of the monarchs’ migratory phenomenon.”