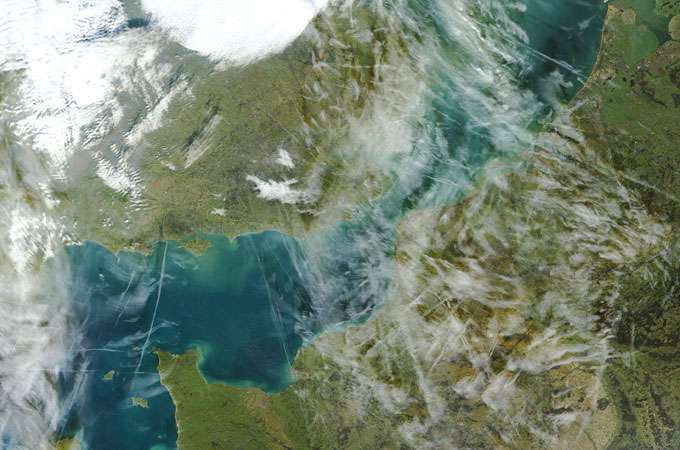 On the Vapor Trail

You may never see those wispy contrails drifting across the sky in the same way again. Despite their delicate appearance, the cloudy streaks created by aircraft appear to be aviation’s biggest contribution to global warming, a new analysis finds.

Contrails can last long after the plane that created them has touched down, scientists have found. Indeed, they’ve even named a certain kind of cloud—“contrail cirrus”—after the streaks that make them. Contrail cirrus include both the “young, line-shaped contrails and the older, irregularly shaped contrails that arise from them,” Ulrike Burkhardt and Bernd Kärcher of Germany’s Institute for Atmospheric Physics report in Nature Climate Change.

To see how the clouds might contribute to warming, the pair built a computer model that simulated how contrail cirrus clouds spread and how the vapors trap and reflect radiation. It suggested that the clouds can cover two percent of Europe and one percent of the United States—and that the warming associated with contrail cirrus is nine times greater than that caused by line-shaped contrails alone. At the same time, however, contrail cirrus also “cause a significant decrease in natural cloudiness, which partly offsets their warming effect,” the authors note. The next step, they add, is to plug their data into studies that seek to tally aviation’s total contribution to warming—and find ways to reduce it. The forecast for climate studies, it seems, remains cloudy.