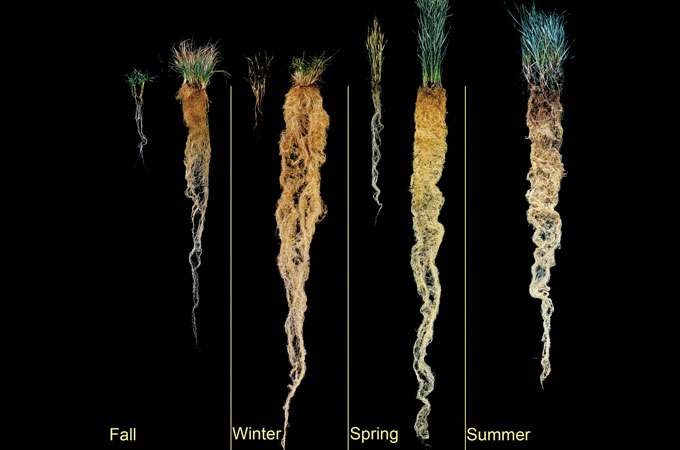 New technologies are reinventing farming from the roots up

Some people have recurring dreams. Jerry Glover dreams of recurring plants—perennial crops that would naturally re-sprout year after year, saving energy and fertilizer while providing more ecological bang for our buck than annual crops that drop dead after just one growing season.

It’s an old idea that is getting a new look, thanks to emerging plant-breeding technologies and increasing environmental concerns. And Glover—an agro-ecologist at the Land Institute in Salinas, Kansas—is one of its most vocal champions. In the past few years, he and his colleagues have published a pile of papers spelling out the potential advantages of perennial crops and arguing for a major research push. Last year, Glover’s passion earned him a nod from the National Geographic Society, which named him one of its Emerging Explorers in search of “exciting new discoveries.”

Although modern annual crops such as corn, wheat, and soybeans produce huge yields, that bountiful harvest isn’t without headaches, Glover and John Reganold of Washington State University recently noted last year in Issues in Science & Technology. Annual crops “must be replanted each year from seed, require large amounts of expensive fertilizers and pesticides, poorly protect soil and water, and provide little habitat for wildlife,” they wrote. “Their production emits significant greenhouse gases, contributing to climate change that can in turn have adverse effects on agricultural productivity.”

Perennials, in contrast, have “longer growing seasons and more extensive root systems that make them more competitive against weeds and more effective at capturing nutrients and water . . . In addition, soils are built and conserved, water is filtered, and more area is available for wildlife.”

Given those advantages, why aren’t we planting Phoenix-like corn and wheat plants that regularly rise again? One reason is that, historically, plant breeders haven’t been able to overcome the steep physiological tradeoffs between perennials and annuals. Annuals that get just one shot at procreating, for example, tend to put more energy into making seed—a trait that humans have enhanced through millennia of selective breeding.

In contrast, perennials typically put more energy into growing roots and leaves and less into setting seed—in part because they get many chances to reproduce. Over the past half-century, a few breeders have tried to create plants that blend the best of both worlds—perennials that produce high yields—but they typically didn’t perform as well as their annual cousins.

Thanks to powerful new gene engineering and to trait screening and selection tools, however, “plant breeders can now, for perhaps the first time in history, develop perennial versions of major grain crops,” Glover and Reganold write. Argentina, Australia, China, India, Sweden, and the U.S. have already launched research efforts into creating crops such as perennial corn and wheat, in some cases by creating hybrid populations derived from annual and perennial parents, Glover’s team noted last year in Science. Even if such varieties don’t have the highest yields, they stated, they could still be useful—because they could thrive in marginal or erosion-prone soils or require less water than annual crops. Such flexible new varieties “could make it possible to develop radically new and sustainable farming systems within the next 10 to 20 years,” Glover and Reganold argue.

Such rapid advances, however, will depend on adequate funding—and so far, perennial-crop science is drawing relatively modest support worldwide. To change that in the U.S., one of Glover’s Land Institute colleagues—founder Wes Jackson—has proposed that the government fund about 100 plant breeders, geneticists, and ecologists to develop perennial grain, legume, and oilseed crops. He estimates that the project would cost about $50 million annually—a mere “blip” compared to the more than $250 billion that U.S. taxpayers are due to pump into the farm economy between 2008 and 2012. It’s an idea that budget-conscious lawmakers in Washington may not want to hear—but with advocates such as Glover, the concept of perennial crops is likely to keep coming back up, again and again.