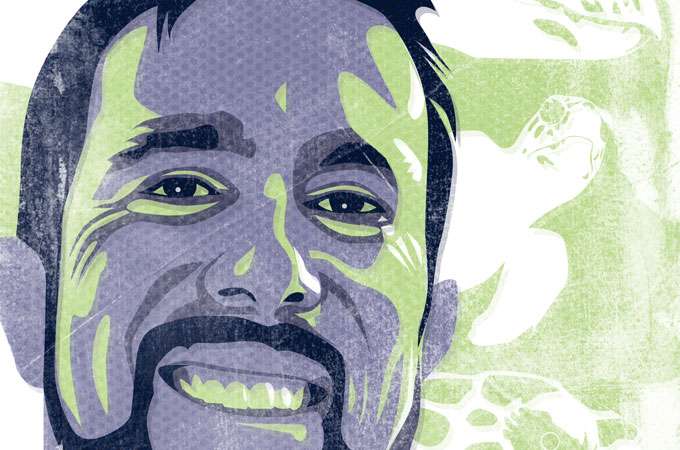 Last year, biologist Alexander Gaos drove his derelict pickup truck thousands of miles along the western coasts of Mexico and Central America. His mission? First, coaxing suspicious fishermen—and even poachers—into revealing where he could find critically endangered eastern Pacific hawksbill sea turtles, which are often killed for their elaborate, colorful shells. Then, transforming these potential enemies into allies. It’s a mix of science, diplomacy, and grassroots organizing that Gaos—a founder of the nonprofit Eastern Pacific Hawksbill Initiative and a member of the IUCN’s Marine Turtle Specialist Group—sees as essential to twenty-first-century conservation.

Poachers don’t share secrets with strangers. Why did they talk to you?

When I was a kid, my family traveled in Baja California, living out of our car and hanging out in fishing towns. We learned the language, and I got good at meeting strangers. I idolized fishermen—they always knew exactly where the fish were. I think that sense of respect communicated itself years later. It also helped that I was with my wife Ingrid, who is also a turtle expert, and my baby boy Joaquinn.

Did you tell people that you were a conservationist?

That was not the word I used. These were folks who thought of “conservationists” as people who got you thrown in jail, got your beach closed, and turned it into a turtle project. I tried to tell them I was not there to take names, call the cops, or bag on them for eating turtle eggs. When they asked me whether I ate turtle eggs, I sometimes told them: “Yes, sure, I’m not going to lie to you.” Then I’d challenge them, telling them that scientists thought hawksbills were extinct. They’d say: “No, they’re rare, but still around

More often than we expected. They showed us how the juveniles hid in small, underwater caves. They took us into mangrove swamps, where the females laid eggs. Honestly, when I started, I thought I’d end up writing a paper that said: “It’s true, we couldn’t find any, they’re doomed, forget it.” Now, we’ve found about 500 new nest sites in El Salvador and Nicaragua alone. (1)

Any one turtle that has stuck with you?

I was snorkeling one night when a fisherman flicked his light toward the bottom. It lit up the shell and showed how beautiful it was—only hawksbills look like that, which is why they are endangered. It slowed down and looked up, as if to say: “Now, what is that?”

Why make the effort to work with these folks?

Because they have already pushed hawksbills very close to extinction, and they aren’t slowing down. Because there’s just no way you are going to find your way around those places if you don’t have the locals helping you.

So, how do you win them over?

Well, we’re giving local fishermen incentives not to poach. In Nicaragua, we’ve started paying a fishing cooperative $40 for every nest site they protect. Last year, they protected more than 200—that’s nearly half the known population!

“Blue.” That’s what Joaquinn called it. A ’93 Ford 150 with a half-seat in the back—that’s where the car seat goes. And a camper shell. It’s one of the most common trucks in Central America, so there are always parts. That’s a point worth stressing: If you want to do this kind of work, you’re gonna need a good truck.