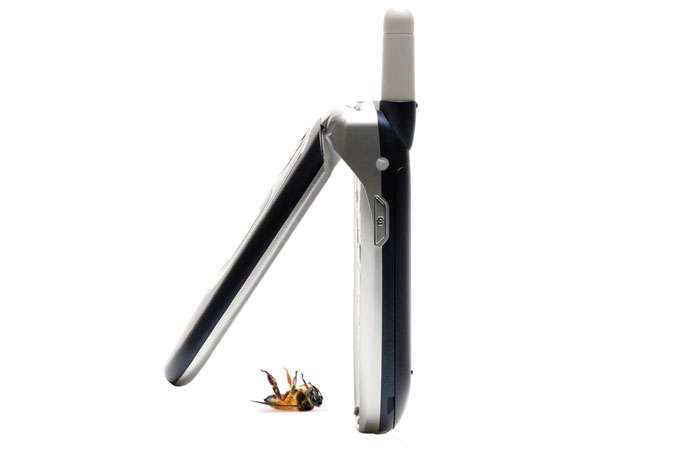 Cell phones can be annoying. But could the electromagnetic fields they produce be contributing to the collapse of honeybee colonies? New research showing that bees, too, are annoyed by cell calls is adding to the buzz surrounding a provocative idea.

Experiments suggesting that active handsets tucked into hives can lead to changes in bee behavior—and even colony abandonment—“have been highly controversial,” Daniel Favre of the Swiss Federal Institute of Technology in Lausanne writes in the journal Apidologie. But the results are consistent with research showing that bees can sense electromagnetic fields, in part thanks to tiny, magnet-like crystals in their cells. To get a better handle on just how sensitive bees might be to the fields produced by cell phones, Favre monitored five Swiss hives between February and June 2009. In some, he placed inactive cell phones; in others, he rigged the “Handys” to keep communicating for up to 20 hours. In each hive, he used sensitive microphones to record how the bees responded.

The soundprints revealed that active handsets “have a dramatic impact on the behavior of the bees,” he concluded. In particular, about 30 minutes after the phones rang, the bees began producing a signal known as “worker piping.” The insects typically pipe to signal a disturbance or to trigger the “swarming” process that leads to the establishment of a new colony. Once the phones were hung up, the bees typically returned to a “quiet state” after just a few minutes.

“Although mobile phones are not present in the close vicinity of honeybees in real life,” Favre says, the study sets the stage for better experiments. Phones could be placed at various distances from hives, for instance, and researchers could add video cameras to get a better sense of just how the bees are reacting to this sometimes infuriating bit of mobile technology.