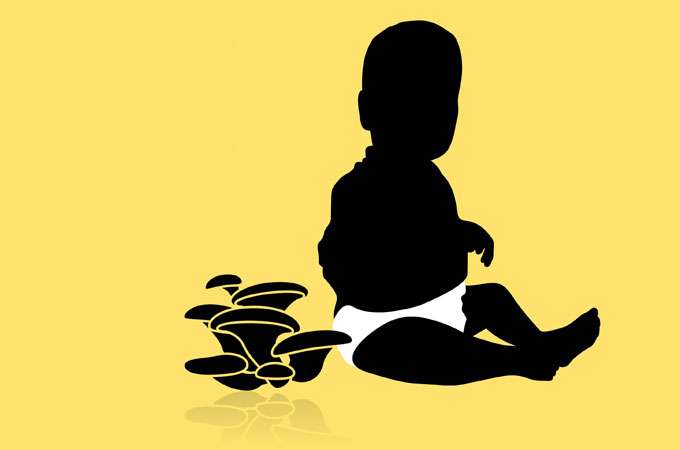 Mushrooms that clean up dirty diapers

Changing a dirty diaper isn’t a fun job. Eating a diaper is even less fun, but luckily there are fungi that can do just that.

Oyster mushrooms, Pleurotus ostreatus, can devour 90 percent of a disposable diaper within two months, observed Alethia Vázquez-Morillas of the Autonomous Metropolitan University in Mexico City in the journal Waste Management. (1) What’s more, the mushrooms grown on diapers are edible. Vázquez-Morillas has dined upon them herself.

“They are cleaner than most of the vegetables you can find in the market, at least in Mexico,” said Vázquez-Morillas in an interview with The Economist. Disposable diapers normally take centuries to biodegrade in landfills. They are mostly made of cellulose, the tough material that plants use for structural support. In the airless netherworld of a landfill, cellulose can take 500 years to break down. But oyster mushrooms thrive on cellulose. They are already grown on cellulose-rich materials such as barley straw, coffee grounds, and even the leftovers from making tequila.

Mexico alone throws away 5 billion diapers a year, noted Vázquez-Morillas. When you consider the billions of diapers thrown away around the world, a huge waste-management problem could be turned into a cheap supply of mushroom food.

But will people really eat mushrooms grown on Junior’s diapers? Vázquez-Morillas asserts they are safe, since the diapers are sterilized before use. The diapers are steam-sterilized before being inoculated with mushroom mycelium, the network of white threads that makes up much of the fungus’s structure. Steaming kills any bacteria and other fungi that could out-compete the oyster mushrooms for living space on the diapers. It should also knock out any creatures that cause disease in humans.

Unfortunately, the cost of steam-cleaning could make the process economically impractical as far as growing mushrooms for market is concerned. But the value of breaking down diapers goes beyond the sale price of oyster mushrooms.

Landfills are filling up fast and becoming more expensive to build. Reducing the intake of garbage extends the life of the landfills already in existence. And it looks like mushrooms can help. ♣

From: “Tasty Mushrooms From Dirty Diapers” by Tim Wall, posted on DiscoveryNews.com on June 15, 2011.  Courtesy of Discovery Communications, LLC.