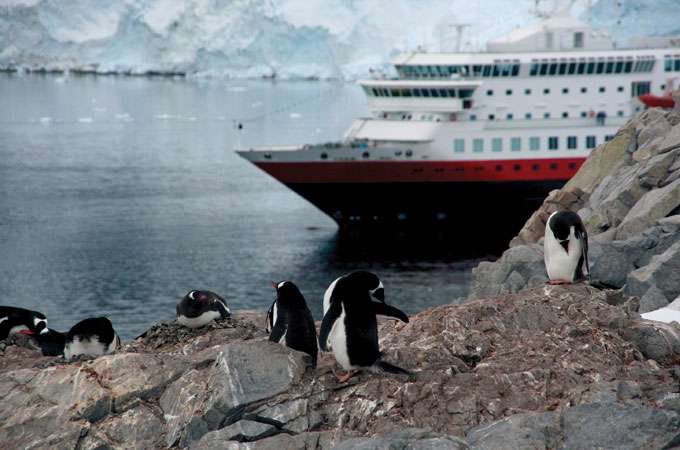 The beauty of Antarctica’s vast ice sheet may be a selling point in the travel brochures, but researchers are now taking a closer look at how much the South Pole’s tourism industry contributes to the global carbon emissions that are threatening to melt the ice.

Traveling to Antarctica is energy-intensive, Ramon Farreny of the Autonomous University of Barcelona and seven colleagues write in Antarctic Science, especially because “ships represent the world’s most polluting combustion sources per unit of fuel consumed.” Antarctic tourism reached a high of 46,000 visitors during the 2006–2007 season, and the ecological impact of those visitors is a contentious issue. Farreny’s team entered the fray by estimating “the global environmental impact of Antarctic tourism in terms of CO2 emissions.”

Using data on 36 vessels and 36,520 passengers from the 2008–2009 tourist season, the researchers calculated the total emissions from polar cruises. Then they added estimates of emissions from the commercial flights that bring tourists from their home countries to the gateway cities of South America.

“An average tourist trip to Antarctica results in average emissions of 5.44 of CO2 per passenger,” they concluded. “Approximately 70 percent of these emissions are attributable to the cruising part of the trip and 30 percent to the flight.” In total, ship-based tourism produced more than 198,000 tons of carbon-dioxide emissions during the 2008–2009 season. Although this accounts for just about 0.02 percent of worldwide tourism-related emissions, “the emissions caused by a single Antarctic holiday do not only vastly exceed the average emissions per international tourist trip (0.68 tons of CO2), but also the annual per capita emissions of the average world citizen (4.38 tons).”