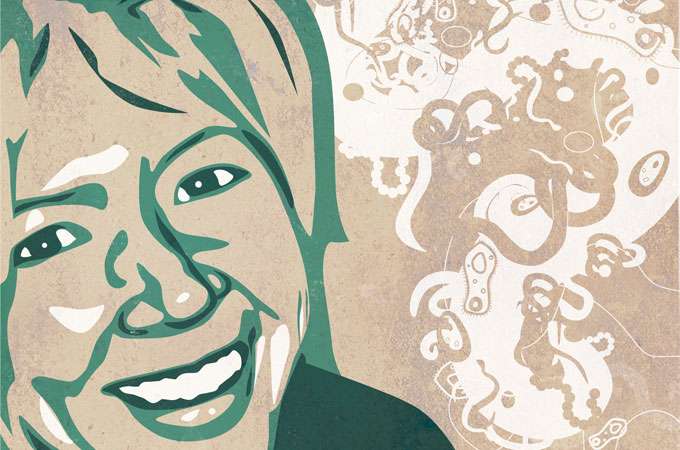 Counsel for the Accused

Parasites are the pariahs of the biological world—they get no respect. Everybody knows that at best, they are freeloaders. At worst, they can kill or maim the creatures they latch onto. But hardly anybody knows that they also help keep ecosystems healthy. Elizabeth Nichols, an ecologist at the American Museum of Natural History in New York City, argues that it’s time for us to start paying more attention to the good things parasites do—and to the possibility that many of these extraordinary creatures will soon need protection from extinction. Is it time for the Parasite Conservation Society?

I just did an online search for “parasite” and got a nasty picture of a two-foot guinea worm emerging from a human foot . . .
It figures. There are lots of parasites that kill or cripple people in disgusting-looking ways. Medical researchers have spent millions on efforts to eradicate these creatures, which is as it should be. The problem is that parasites are the largest class of living things on earth—by far—and the vast majority does not prey on humans. They do nasty things to individual life forms—that’s what parasites do—but evidence is mounting that they also protect species and keep ecosystems healthy.

Can you give me a for-instance?
Sure. In the coastal marshes of Southern California, there’s a tiny fluke that gets into the brains of certain fish and forces them to flap around on the surface of the water. That’s bad news for the fish. But researchers say it’s good news for local seabirds that devour them . . .

So in the broader sense, the flukes that wreck the brains of fish may be holding this food web together?
Yes. And if the flukes are targeting the weakest of these fish, they may also be strengthening the species.

How widespread are these “good” parasite behaviors?
No one knows for sure, but there are reasons to suspect that they are widespread. First of all, if parasites did nothing more than kill and maim their hosts, there wouldn’t be that many hosts around today. Or—for that matter—many parasites. Second, research has shown that many thriving ecosystems are extremely rich with parasites, including some that help “defend the fort” from outside threats.

For instance?
Our guts. According to “the hygiene hypothesis,” parasites and microbes in the human digestive system may help ward off problems such as Crohn’s disease, either by attacking the threat directly or by strengthening parts of the human immune system.

So these are the parasites you’d want to keep around?
Yes. Which brings us to the problem of extinction. When larger creatures such as mammals go extinct, it’s likely that their parasites will disappear as well. That’s potentially alarming, because we don’t know enough about how parasites shape migration routes or keep potential predators away from prey. It is this amazing, gaping hole in what we know about the world. And, as of now, we aren’t trying hard enough to close it.

Last year, I read every English-language ecology textbook I could find—74, I think. Just two described some of the “good” things parasites do. Some covered parasites in just one or two “neutral” lines, and many didn’t speak of them at all, which may be worse.

So how do we get the word out? Bumper stickers that say, “Save the tiny fish flukes?”
I’d put one on my car, definitely. And if one out of every 50 people who saw it found out what fish flukes were, we’d be ahead of where we are right now.