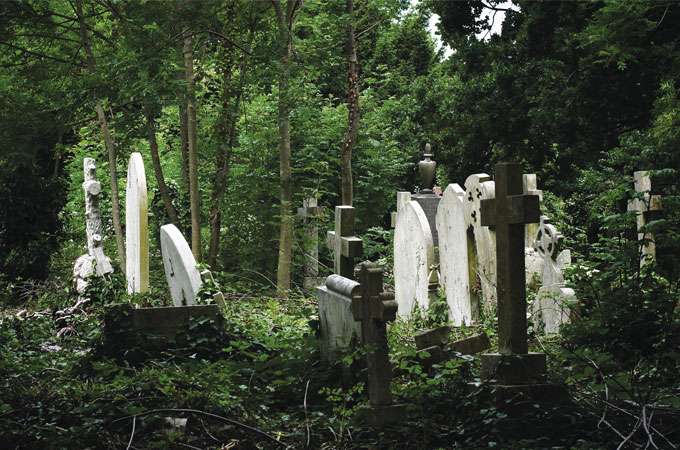 The Baby Boom is about to give way to the Corpse Boom, as planners begin to ponder where we’ll bury the roughly 76 million Americans born between 1946 and 1964. The die-off will boost demand for burial space and pose a challenge to land-use planners, a new study concludes—but also create opportunities for innovative, conservation-friendly “landscapes of death.”

“Creating cemeteries may be one of the most lasting land-use decisions a community makes, fraught with all manner of wicked issues,” researchers from Florida State University in Tallahassee and from Iowa State University in Ames write in Landscape and Urban Planning. There can be concerns about how bodies are handled and allowed to decay, plus conflicts over converting green spaces to more dedicated uses.

And once the bodies are in the ground, cemeteries can become hallowed ground: “The geography of burial is essentially permanent: difficult to move and almost as difficult to plan around.”

Despite these challenges, demand is up. Researchers estimate there are already more than 100,000 cemeteries in the U.S., but the distribution “is quite uneven, ranging from around 30 in Hawaii to over 12,000 in Tennessee,” the authors note. And with a majority of Americans saying they still prefer to be embalmed and buried in a casket—not just cremated and scattered to the winds or waves—there will be a need for millions of new plots.

The researchers offer a system for figuring out just how much more burying ground a city or region might need. It “requires the understanding of four factors: mortality rates, cremation rates, burial migration (how many bodies are moved elsewhere for burial), and the land area available for interment,” they note. So, for instance, they calculate that Palm Beach County in Florida—which has more than a million residents, many of them elderly—could need another 66 acres of cemeteries over the next 30 years. Such totals, however, could be much lower if Americans adopt land-saving burial practices that are commonplace elsewhere—such as “rent-a-graves,” which allow cemetery owners to bury new bodies on top of old ones after decades-long leases run out.

“Green” burial practices—such as letting a corpse decay in a simple pine box—could require even more land, however. “Because of the space needed to ensure safe decomposition, individual burial plots must be spread widely, thereby increasing the total amount of land needed and decreasing relative burial density,” the authors note. But the bigger cemeteries could be harnessed to achieve other goals, such as open-space preservation. “In the future, demand for burial space may be more closely connected to preserving environmentally sensitive land, which would require an overall reduction in burial density,” the authors note. So green burials, they conclude, could become “a clever technique for permanently conserving land.”