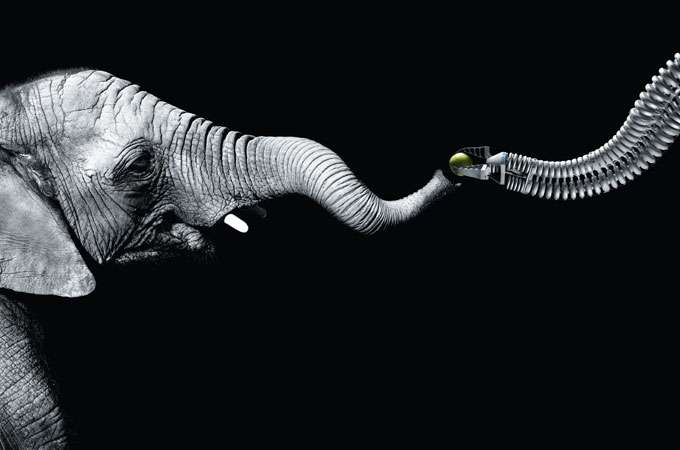 Nature’s most elegant designs may hold the key to super-efficient, ecofriendly technology

The elephant’s trunk re-imagined as a graceful machine 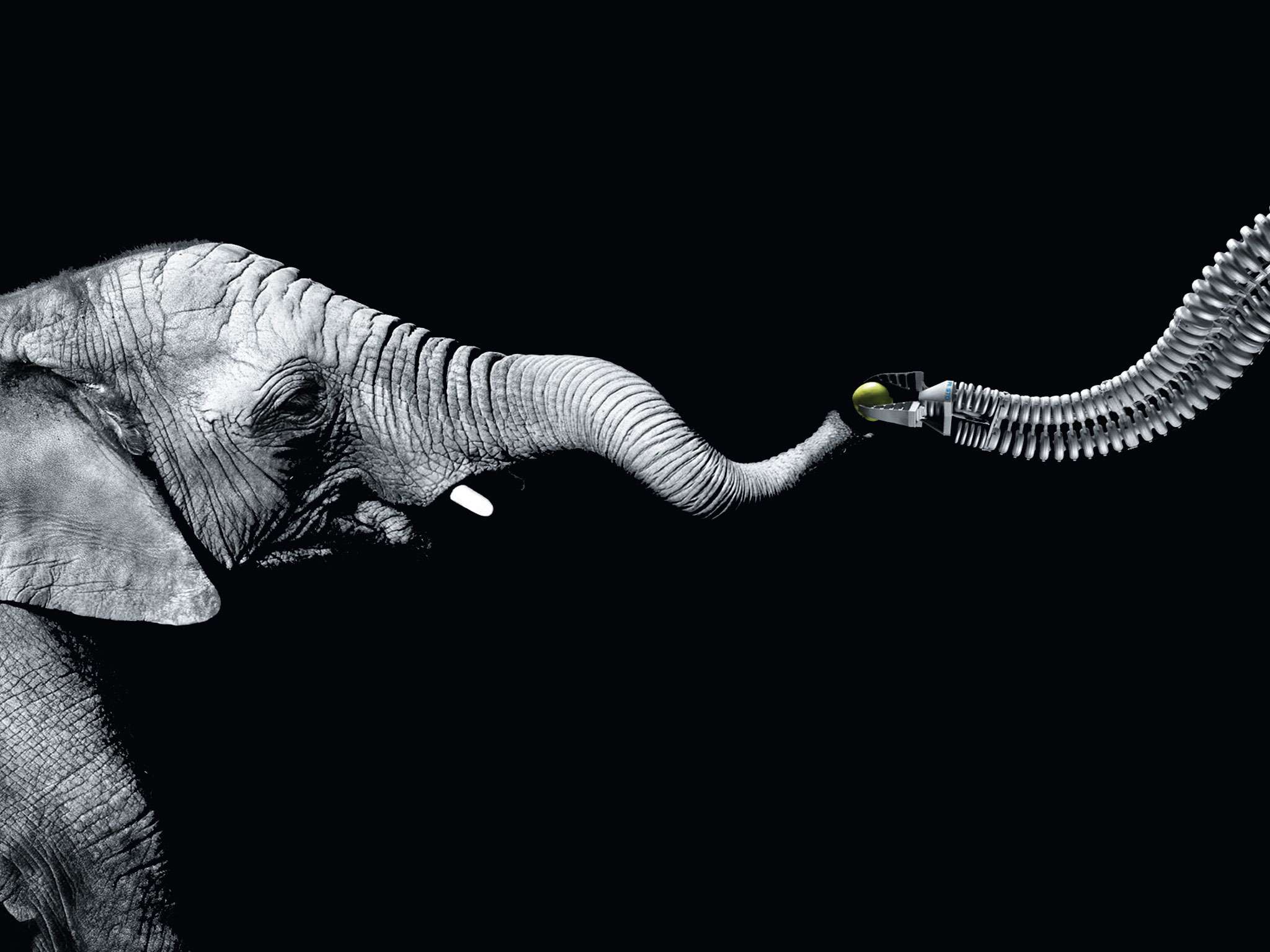 The Bionic Handling Assistant is a lightweight, fluidly moving, robotic arm inspired by the strong but flexible trunk of an elephant. Made of the polymer polyamide and containing no iron or steel, the arm is strong enough to lift objects yet supple enough to work safely alongside humans. Air chambers within the arm allow it to stretch and bend, while a wrist-like component fine-tunes the gripper’s position. The gripper fingers are also strong and flexible, mimicking the structure of fish fins. The Bionic Handling Assistant may be used in medicine, as an aid for the handicapped, or as a support for industrial assembly processes. The German engineering company Festo, along with the Fraunhofer Institute for Manufacturing Technology and Advanced Materials, developed the design through the Bionic Learning Network. The initiative links up renowned universities, institutions, and development companies in order to apply principles from nature to new technologies. ❧

Learn more and watch demonstrations of the Bionic Handling Assistant at http://www.festo.com/bionic.
Image courtesy of Festo 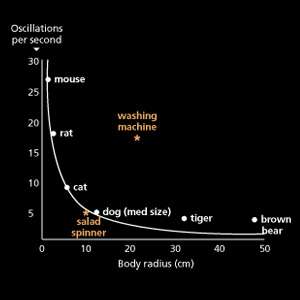 Big, furry animals tend to have loose skin, which produces large accelerations when the animal shakes back and forth—like cracking a whip. Small animals must shake faster to generate enough water-shedding acceleration.

Andrew Dickerson and colleagues at the Georgia Institute of Technology drenched 27 animals (including a lab mouse, six different kinds of dogs, and a tiger from Atlanta’s zoo) and filmed the animals, at up to 1,000 frames per second, shedding the water. They discovered that shaking speed relates to body size and can be described with a simple mathematical model. The new insights into animals’ shaking could be used to develop more efficient washers, dryers, painting equipment, and spin coaters. ❧ 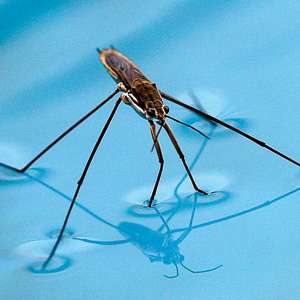 The water strider’s non-wetting legs allow it to navigate effortlessly on the surface of the water. A single leg can support about 15 times the insect’s body weight without breaking through. Joanna Aizenberg of Harvard University has taken a hint from the water-repellent texture of the hairs on a water bug’s leg to address the costly problem of de-icing aircraft wings. Instead of using chemicals to melt the ice, Aizenberg and her team are developing a nanostructured surface for planes that could prevent ice formation in the
first place. ❧ 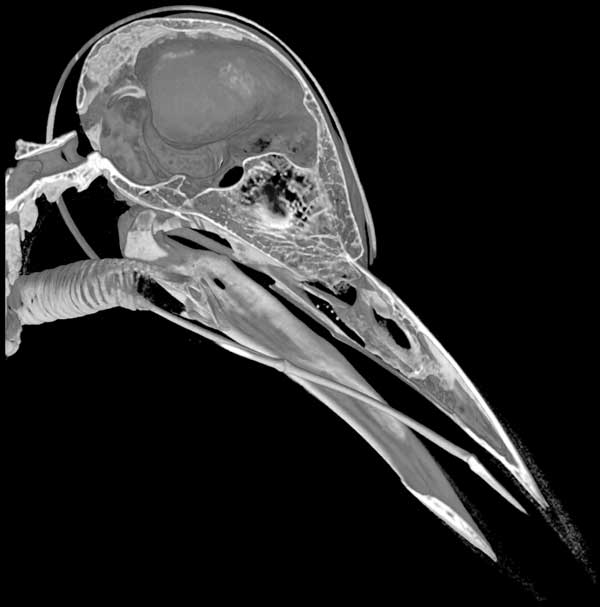 The woodpecker school of hard knocks

Using CT scans and video, researchers at the University of California at Berkeley

parsed out the shock-absorbing features of a golden-fronted woodpecker’s head. The findings are inspiring a new generation of shock-absorbing systems for electronics. For example, a layer of rubber stands in for the tongue-supporting, load-distributing hyoid, and closely packed glass beads mimic the bird’s spongy bone. The bio-inspired system withstood shocks of up to 60,000 g in lab tests. ❧ 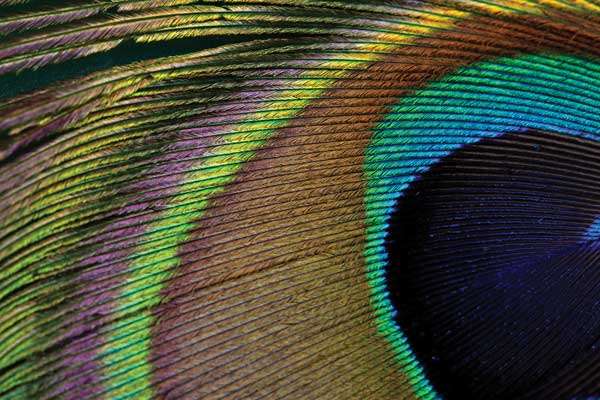 Whereas much of the color in nature comes from pigments that absorb light at certain wavelengths and reflect it at others, peacocks use a different strategy. The iridescence of peacock feathers is created by two-dimensional crystal structures. The spacing of these structures corresponds to the wavelength of the light that is reflected back. Small variations produce the many brilliant colors of peacock and hummingbird feathers, along with that of lustrous butterflies, moths, and beetles. This strategy for producing iridescence in nature is the inspiration for pigment-free paint that changes color when viewed from different angles. ChromaFlair paint, developed by JDS Uniphase, contains flakes layered in such a way as to reflect light at specific wavelengths and give off brilliant color. The paint is often used to give automobiles and electric guitars that oil slick–like, iridescent look. ❧ 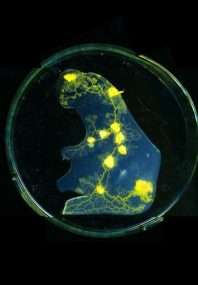 Much like humans trying to get from point A to point B, the slime mold Physarum polycephalum seeks out food sources along the shortest, most efficient pathways to optimize nutrient transport to remote parts of its single-celled body. Andrew Adamatzky and Jeff Jones, computer scientists at the University of the West of England in Bristol, represented the U.K.’s major urban areas with oat flakes on sheets of agar shaped like Great Britain and observed how the slime mold foraged from its starting point in “London.” The resulting network looked very similar to the U.K.’s existing roadways, though the slime mold did suggest a couple of new routes. Adamatzky has also tested the slime mold’s ability to efficiently travel between cities in the U.S., Canada, the Netherlands, and elsewhere. ❧

Twirling seed is a prototype for efficient ceiling fans 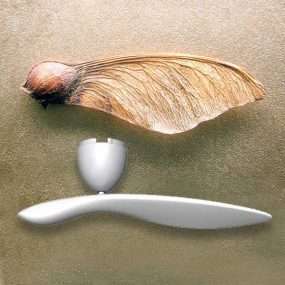 The seedpod of a sycamore maple tree rotates on its own as it falls, thanks to the balance between the weight of the seed and the length of its wing. The shape of the seedpod has inspired a quieter, more efficient fan. A single, aerofoil-shaped blade can match the airflow of conventional flat-bladed fans while operating at a lower speed. The bio-inspired fan reduces turbulence, wind noise, and energy use.❧ 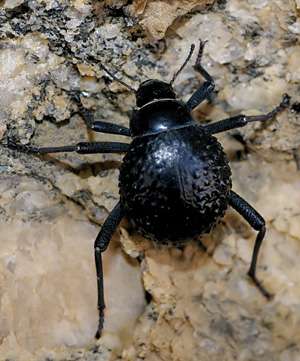 The Namib Desert receives less than half an inch of rain per year. The Namib beetle stays hydrated by attracting droplets less than 40 μm in diameter—much smaller than raindrops—to its bumpy back.

In the Namib Desert on the southwest coast of Africa, the Namib beetle has developed a slick adaptation to stay hydrated. Its wings are covered with bumps with water-repelling peaks and water-attracting valleys. When it positions itself toward fog rolling in off the Atlantic, it condenses water vapor onto its back and channels it to its mouth. Shreerang Chhatre of MIT is developing a fog-harvesting mesh material inspired by the resourceful beetle. The mesh attracts water droplets out of the air, and in field tests it has captured one liter of water per square meter per day. The fog-harvesting devices could be used to generate clean water in arid regions as well as at the tops of skyscrapers, to eliminate pumping. ❧