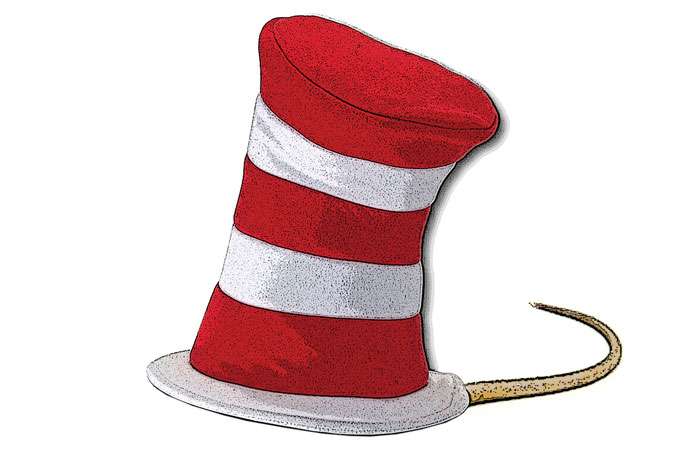 The Rat in the Hat Doesn’t Come Back

William Stolzenburg’s compelling tale, Rat Island: Predators in Paradise and the World’s Greatest Wildlife Rescue, is the story of impassioned conservationists attempting to save vulnerable island fauna (mostly birds) from the ravages of accidentally introduced predators (mostly rats). But rather than merely “managing” the pests, the humans take on the audacious goal of completely eliminating the invaders. Like much of conservation, the central concepts of this environmental tale are simple enough for children to understand. So, here’s the Dr. Seuss version (with footnotes for grownups):

Rats eat birds and that is bad.
Chewed-up birds sure make us sad.1

Lots of rats are even worse.
Quiet islands make us curse.2

Poison bait will kill one rat.
With tons of bait, all rats scat! 3

Bad rats died with pain and gore,
But species matter so much more! 5


1.  If you’re thinking, “I do not like rats and cats, I do not like goats and stoats, I really like green regs and land,” then this is your book. Stolzenburg describes a holy war against recently arrived predators that unfolds along a front from New Zealand to the Aleutians. He’s a master storyteller who weaves together a series of tales packed with swashbuckling adventure. He features renegade conservationists in exotic locations who outwit bureaucrats, defy skeptics, and brave perilous seas to do battle with hordes of depraved rats (and other nasty enemies) in brazen, unprecedented efforts to kill every last defiler of an island paradise. It’s easy to become drawn into the crusade, except when one wonders what the “native” predators ate—and decimated—when they arrived. Or when one ponders whether there’d be any Todos Santos wood rats, San Roque white-footed mice, Anacapa deer mice, or other island endemics had we been there to protect nature from the ravages of their ancestors.

2.  If a rat eating an albatross alive is disturbing, then the carnage of 200,000 rats is a nightmare—and Stolzenburg’s vivid prose takes us into the darkness. His gift for putting the reader into a windswept, bone-chilling setting is enviable. He describes lifeless bodies of defenseless birds “with craniums excavated” by rats. Cats possess “a butcher’s array of artery-slicing canines and meat-shearing molars.” Not only is the reader swept up into the dark lyricism, but Stolzenburg gets a bit carried away with facts as well. We’re told that “New Zealand limped toward the close of the nineteenth century a hollowed-out shell of life,” that rats were about the only living things on Litke Island (quite a feat of ecology), and that rats destroy one-third of the world’s crops (not even in the ballpark). Hyperbole makes for gripping prose; but on reflection, the reader is left wondering whether the case for conservation requires such exaggeration. Disappointingly, the potential for rich and nuanced analyses of ecological issues and environmental ethics is largely unrealized.

3.  The arsenal of chemical warfare agents (“Would they like them in a box? Would these poisons kill a fox?”— in the Aleutians, they did) is accompanied by leg-hold traps, wire snares, and .223-caliber rifles. If the first rule of conservation biology is “more is better” (more breeding pairs, sanctuaries, corridors, funding, and regulations), then this surely applies to pesticides. So the would-be saviors of island natives dumped 50 tons of rat bait onto the 7,000 acres of Litke Island and 132 tons onto Campbell Island, which works out to more than a pound per rat. As one might guess, more than rats scat with that much poison. But a few hundred dead birds is evidently a small price in terms of collateral casualties. According to one conservation convert, the eagles on Rat Island were “going to die anyway”—a lame rationalization, given that the same could be said of the bird species being saved by the biocidal blitzkrieg.

4.  Humans use their heads, sort of. Although Stolzenburg swoons over the conservationists’ crusade, he also points out problems. As when the elimination of cats from Macquarie triggered a biological tsunami of rabbits and rodents that ravaged the island’s vegetation and birds. Or when conservationists (not rats) killed four of the five last-known kakapos. Even when they use their heads, which is often, the self-righteousness of the conservationists tempts one to secretly cheer for the rats—or at least feel schadenfreude when extermination programs go awry. And it would be valuable if the book forced us to use our heads to answer questions such as: Is an earlier ecological state invariably better? Is there a “balance of nature”? And is anthropogenic change always bad?

5.  Initially we’re led to believe that poisoned rats die peacefully, but Stolzenburg eventually reveals that they suffer lingering deaths. Even so, “gruesome slaughters” by rats and cats are far more vividly recounted than internal hemorrhaging and leg-hold traps. The ethical complexity of the conservationists’ killing spree never deepens; animal-rights advocates are dismissed as vitriolic fanatics. In the end, I generally align with the morality of eradication. Preventing anthropogenic extinction is our duty, as is minimizing the suffering of other sentient creatures—and sometimes the latter trumps the former. I wish Stolzenburg had pressed further with the struggle expressed by a fellow from the New Zealand Department of Conservation: “It’s not the animals’ fault they’re here. It’s our fault, really. We’ve got to treat them humanely, until we kill them.” The world of conservation is not a simple matter of the Lorax versus the Once-ler—or of good birds versus evil rodents. Maybe Seussian conservation isn’t possible, after all.