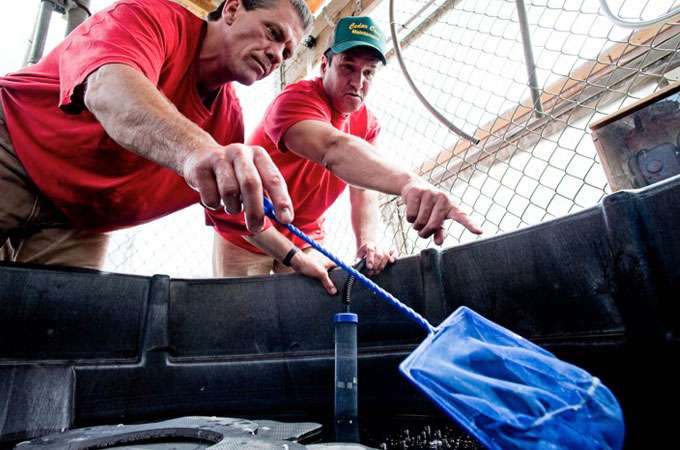 At the Cedar Creek Corrections Center in Littlerock, Washington, inmates are raising endangered Oregon spotted frogs for reintroduction into the wild. Compared with frogs raised in zoo programs, the frogs at Cedar Creek are significantly beefier and reach maturity faster. Maybe that’s because the prisoners, who are paid 42 cents per hour for their work, baby their tiny charges day and night. They monitor the water constantly and make sure that each frog gets plenty of crickets to eat.

The frogs are entrusted to prisoners as eggs, not much bigger than the tip of a pencil. The prisoners keep detailed notes and growth charts as the eggs grow into tadpoles, then frogs, before being released into a protected wetland at Joint Base Lewis-McChord—a large army and air force facility at the southern end of Puget Sound. Cedar Creek inmates raised 162 frogs last year, recently doubled their capacity, and are taking in undersized frogs from zoos for special attention. 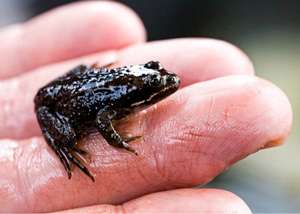 Raising frogs is just one of several conservation efforts established by the Sustainable Prisons Project, a partnership between The Evergreen State College and the Washington State Department of Corrections. At a large men’s prison in Aberdeen, Washington, inmates are rearing 16 species of rare native plants for prairie restoration and conducting experiments with smoke-infused water to stimulate seed germination. Meanwhile, prisoners working in a new greenhouse at the Mission Creek Correction Center for Women are raising endangered Taylor’s checkerspot butterflies, which have been reduced to a few small, isolated populations in the Pacific Northwest. The prisoners not only tend the rare butterflies but also help scientists study which plants the butterflies prefer for laying their eggs.

Prisons turn out to be an ideal place for this type of conservation work, because they are carefully controlled environments that are home to people with lots of time on their hands. Prison administrators, who know that idleness can be dangerous, have embraced the program.

In a world that couldn’t be farther removed from nature, inmates are bonding with plants and animals. The project’s directors hope that the prisoners will gain not only a stewardship ethic but also valuable job experience and an appreciation for science and the environment.

The notion of using prisoners for conservation work isn’t entirely new, of course. For decades, minimum-security prisoners have been assigned to fight wildfires, conduct prescribed burns, build trails, erect fencing, set traps for invasive predators, and plant trees. But only in the past three years have prisons begun to take on a new mission of conserving endangered species.

The Sustainable Prisons Project now operates in four Washington prisons, and project leaders hope to teach prison officials from across the West how to implement similar programs in their own states. The conservation projects are part of a larger sustainability effort that also gets inmates involved in gardening, composting, recycling, beekeeping, aquaculture, and working with dogs and cats to make them adoptable. Some projects aim to reduce the carbon footprint of prisons, while others focus on economics. One prison, for example, was able to avoid a costly upgrade to its water-treatment plant simply by asking prisoners to scrape their plates before washing them. For all these programs, the prisoners learn not just how to do things sustainably but also why.

“Prisons could be models for sustainable societies, because everything that comes into and out of a prison is monitored. They have to function as self-reliantly as possible,” says Carri LeRoy, a stream ecologist at Evergreen and, with Washington’s director of prisons, codirector of the Sustainable Prisons Project.

Because 97 percent of all prisoners re-enter society at some point, the project’s directors hope that it will do as much for prisoners as for the vanishing species that they are helping to restore. “Even though their time might not be up yet, can have some comfort in knowing that these organisms get back out there,” LeRoy says.

In 2010, for the first time, scientists from the Washington Department of Fish and Wildlife found egg masses in the wetland where they had released the Oregon spotted frogs raised by prisoners. That means some of the frogs have survived and are successfully reproducing in the wild. ❧