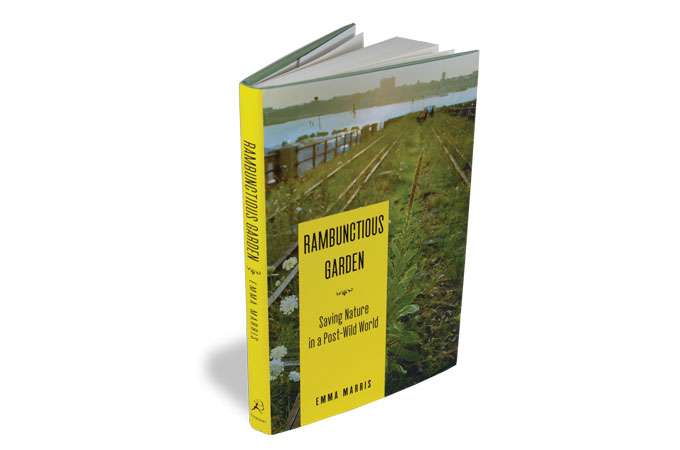 Every so often a book comes along that seems perfectly timed to a pivotal moment in a field—when an old set of ideas is losing its grip and gives way to the new. Rambunctious Garden is that book for this moment in conservation. Through a series of lively discussions with conservation scientists around the world, Marris persuasively argues that the stories we have told about the demise of pristine nature—and the urgent need to save what little is left—have led us astray. Instead, we should be learning to tend the vibrant, mixed-up, impure landscapes that now cover most of the planet.

As a science writer for Nature, Emma Marris is well suited to start a rousing conversation and hold her own in any arguments that ensue. She is witty and willing to poke fun, but with a kind wink and the sort of humor that joins rather than separates. But make no mistake: there is heavy lifting going on in Rambunctious Garden—though it is done with such a light touch that there is a danger one might miss just how profound this book is.

Marris sets out by declaring that we have lost a lot of nature, in two senses. First, she acknowledges that much of nature has been destroyed at the hand of humans. “But we have lost nature in another sense,” she writes. “We have misplaced it. We have hidden nature from ourselves.” And conservation is complicit in that loss. The myth of a pristine wilderness has placed nature “out there,” Marris writes; it’s somewhere we travel to, protected behind signs and gates. Marris traces the history of these ideas from the usual suspects (Emerson, Thoreau, and Muir) to the troubled histories of ideas such as the balance of nature, succession, baselines, and reference states. These concepts have so thoroughly worked themselves into conservation practice that our goal is often to restore nature to a time before human beings (or at least Europeans) messed it up.

Early on, Marris visits the Białowieza Primeval Forest in Poland, home to the last remnant herd of European bison and a shrine to the notion of pristine wilderness. It turns out, however, to be anything but pristine. Marris learns that the forest primeval is in fact a complicated product of human and natural history. Both of these histories have been intimately intertwined for 2,000 years; the forest appears to have reached its current composition of species at roughly the same time human artifacts first appeared in the archaeological record. Archaeologists, historians, and ecologists have collaboratively teased out the ways in which people helped shape the ever-changing forest—chopping wood, hunting wildlife, killing predators, and, in recent centuries, preserving the forest as a royal playground and now a nature preserve. At the end of this chapter, Marris finds herself dancing around a bonfire with her informants. “All around us was the forest, much older, larger, and more solemn than we—but not unconnected to us and not unchanging,” she writes. “We were part of its unfolding story, as it was part of ours.”

From there, Marris is off to the races. Once we change our idea of nature to include areas altered by humans, “a heretofore unthinkable, exciting and energizing thought occurs: we can make more nature.” She adds, “We can make things on Earth better, not just less bad.”

On the rest of her tour through this rambunctious garden, Marris takes the reader firmly by the hand on a journey through some of the most exciting and controversial ideas in conservation. The chapter titles alone are signposts to the future: Weeding the Jungle, Radical Rewilding, Assisted Migration, Learning to Love Exotic Species, Novel Ecosystems, Designer Ecosystems, and Conservation Everywhere. Through deft storytelling, Marris shows how useful, inspiring, and sometimes just plain darned fun it can be to wiggle out of the straitjacket that separates crazed humanity from sanctified nature.

Take Frans Vera’s vision for “Pleistocene rewilding” in the Oostvaardersplassen—a grassy plain in the Netherlands that was under water 50 years ago. He’s re-created a landscape that evokes a distant past previously known only via natural history museum dioramas. The ancient tarpan and aurochs are long extinct, so Vera is using current breeds of Konik horses from Poland and Heck cattle from Germany to create a novel ecosystem. It’s completely cultivated, but it looks and functions like the European savannas that emerged after the Pleistocene glaciers retreated 10,000 years ago.

Full of big ideas, Rambunctious Garden is a surprisingly short book. But it does not shortchange any ideas. I fervently hope they will be taken up and seriously discussed. The conservation community has been circling the wagons around pristine nature for far too long. While vigorous debates reverberate inside the circle, the community has again and again reinforced the notion that we have to present a unified front if we are to have any hope of stemming humanity’s war on nature.

But what if it’s not a war? What if there is no us, no them? Rambunctious Garden gives us the opportunity to explore what conservation everywhere could mean.

I found myself imagining this rowdy company of conservation scientists and practitioners around a dinner table or campfire, hashing out a peace plan and a vision for the future of humanity and nature. Marris is the right person to convoke the participants in this conversation. She is gracious, respectful of differences of opinion, and open to changing her own mind.

In the end, however, Marris pulls her punches, just a little. She imagines a world where we could try different conservation strategies in different places for different ends. For instance, conservationists could divide the Big Island of Hawaii into sections: one for historical restoration and others for species preservation, self-willed wildness, ecosystem services—and food and fiber and fish.

Although her book puts into question our ability to clearly separate nature into any of these categories, I understand why she wants to do this. It gives her plenty of wiggle room. And that is what Marris thinks we most need to save nature: more wiggle room. ❧

–Jon Christensen is an environmental historian and executive director of the Bill Lane Center for the American West at Stanford University.