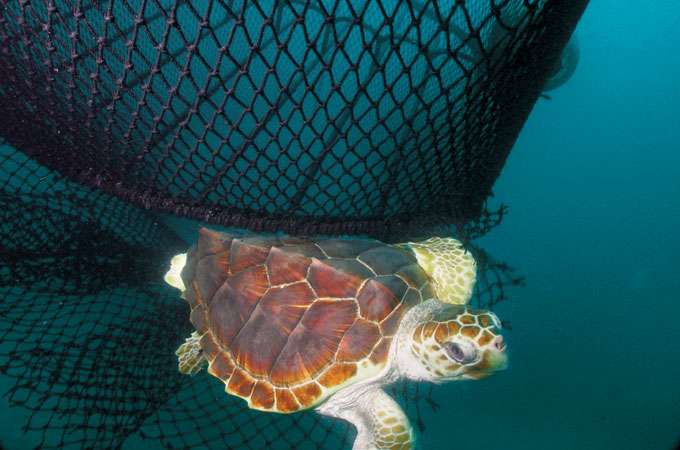 And who says regulations don’t work? The number of sea turtles accidentally caught and killed in fishing gear in U.S. coastal waters has declined by an estimated 90 percent since 1990, according to an analysis of fisheries data.

Before rules to reduce such bycatch by fishing boats were set, more than 300,000 turtles became entangled in nets or caught on hooks each year, researchers at Duke University’s Project GloBAL and Conservation International note in Biological Conservation. Of those, some 70,000 died. Now, thanks to regulations put into place over the past 20 years by the U.S. National Marine Fisheries Service, the annual toll has shrunk to 4,600.

“Our findings show that there are effective tools available for policymakers and fishing industries to reduce sea turtle bycatch,” says Duke doctoral student Elena Finkbeiner, the lead author of the paper. The U.S. experience, she adds, “serves as a model for reducing sea turtle bycatch in other parts of the world.”

Overall, turtle bycatch rates, including both fatal and nonfatal run-ins, have fallen about 60 percent since 1990. Shrimp trawls in the Gulf of Mexico and in southeastern U.S. waters accounted for up to 98 percent of all bycatch takes and deaths.

A number of strategies, including turtle-proof hooks and “turtle excluder devices” in nets, have helped reduce the kill rate, the authors write. But in some fisheries, they note, turtle takes still exceed what populations can sustain. A little more monitoring and stricter regulation, they argue, could solve that deadly problem. ❧