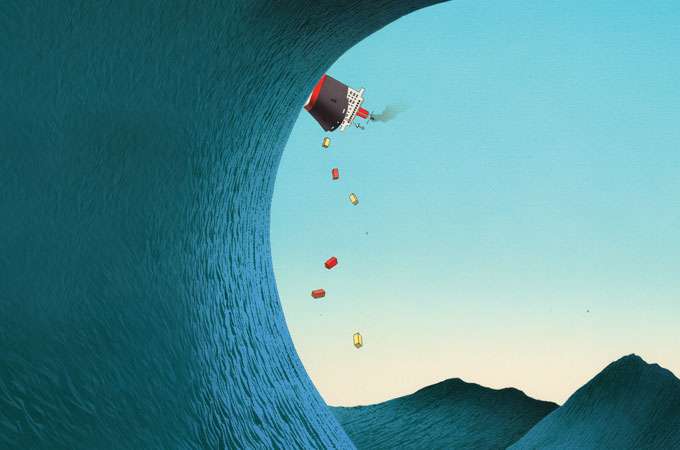 Andre Sharon, an engineer at Boston University and the Fraunhofer Center for Manufacturing Innovation (CMI), has an idea that could launch a thousand ships. He wants to build a fleet of ships—mobile wave-energy harvesters, he calls them—to ply the ocean, fishing for energy.

Although ocean waves are abundant and constant, until now it’s been difficult to harness this source of renewable energy. It’s tough to get permission to build something in the ocean, at-sea structures must be able to withstand hundred-year storms, and undersea cables to bring wave-generated electricity to shore are expensive and require maintenance. Sharon’s approach sails right over the top of such problems: “Why build a permanent structure offshore?” he asks.

Sharon and colleagues from CMI presented the idea last June at the Clean Technology 2011 Conference and Expo in Boston. They envision a 50-meter-long ship, small enough to dock at any standard marina. Buoys floating on either side would be attached to arms that pivot up and down with the waves, driving a one-megawatt generator, with a battery pack on board to store up to 20 megawatts. So after about a day at sea, the ship would head back to port, plug in, and discharge its power into the grid.

“If you know there’s some nice wave activity in a certain location, you can go there that day,” Sharon says, his persona momentarily shifting from East Coast academic to laid-back surfer dude. “You’re not stuck in one place.”

Sharon’s team used 3-D printing to gin up a bathtub-sized model of the system, then tested it out in a wave tank in the laboratory. This exercise showed that the idea is both technically and economically feasible, Sharon says. “We actually spent quite a lot of time doing the economic analysis.” The number they came up with? Fifteen cents per kilowatt-hour, which would make wave energy competitive with other renewable technologies.

The next step in making this swell idea a reality is to build a larger prototype and test it out in the ocean, Sharon says. Eventually, wave-energy harvesters could be retrofitted from existing ships. Dual-use vessels—a fishing boat that doubles as a power plant—might even be possible. ❧