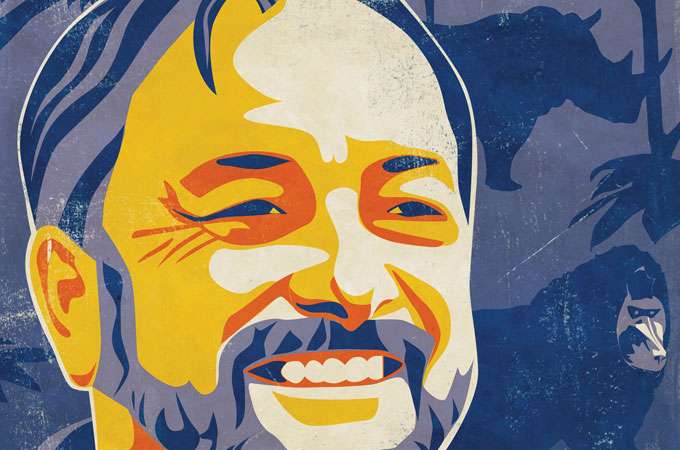 Stem cells are the ultimate all-in-one tool. These unspecialized cells have the capacity to transmute into any type of cell in the body, from a fleck of skin to a bit of bone. That’s why biomedical scientists are excited by their potential to cure human diseases. But Oliver Ryder has a different use in mind: saving endangered species. Over the past few decades, the director of the genetics division at the San Diego Zoo’s Institute for Conservation Research has helped created a unique Frozen Zoo® full of tissue samples from rare animals. And researchers recently drew on those samples to create the first-ever stem cells from two endangered species: the drill (a primate) and the northern white rhino. It was a breakthrough that could help transform biology—and conservation.

You’ve got a lot of species in your Frozen Zoo . . .
More than a thousand, yes.

So why make the northern white rhino one of the first candidates for stem-cell studies?
Part of it was personal. Twenty-five years ago, I helped establish that the northern white rhino was a species in decline—which helped trigger a long series of attempts to save these animals by preserving their homelands, protecting them from poachers, and so on. All of those programs have failed. Now there are only seven northern white rhinos left. Extinction is imminent, because the population is too small, too interrelated, and comprised of too many post-reproductive individuals. It’s a genetic endgame.

Which can be won only if scientists find ways to build the population up again?
Yes. It’s why we were excited to make stem cells out of rhino tissues. If we can turn the stem cells into eggs and gametes, we might be able to help the living population grow—by creating embryos in labs and then inserting them into surrogate species, for example. And if these stem cells can be made to turn into other things—like healthy blood cells, for instance—then we might be able to improve the health of individual rhinos. That could also lead to increased breeding.

Could stem-cell therapies help restore the genetic diversity that no longer exists in the living population?
Conceivably. As it happens, there are 14 northern white rhinos represented in the Frozen Zoo, including some who may have died without reproducing. If we can use their tissues to create new rhino stem cells—and then sperm and eggs and so on—we might be able to introduce a whole new set of genes into this population.

Why am I hearing so many “maybes”?
Because the only thing we’ve done so far is learn to manufacture stem cells out of rhino cells called fibroblasts, and out of the tissues of a relatively common monkey called a drill. That’s a big deal—it’s a breakthrough—but we still don’t know how to make these stem cells turn into sperm or eggs or embryos. And even if we did, we will still have to invent the technologies needed to assist with rhino reproduction. It’s a race that may not end for years, or decades. We may never get it finished.

Then why take such a long shot?
I don’t like the thought of giving up when there is a ray of hope. I don’t want to be the one who has to tell a member of a future generation that we had these amazing rhinos once but weren’t sure we could save them, so we let them go extinct.

What other endangered species are in the Frozen Zoo?
Many, including the Hawaiian crow, the northern brown kiwi, the red-footed gazelle, the northern white gibbon, the olive ridley sea turtle and the Galápagos tortoise.

And are you attempting to develop stem cells from those animals?
Some of them. I am not prepared to name the species yet. But we are very busy these days. ❧