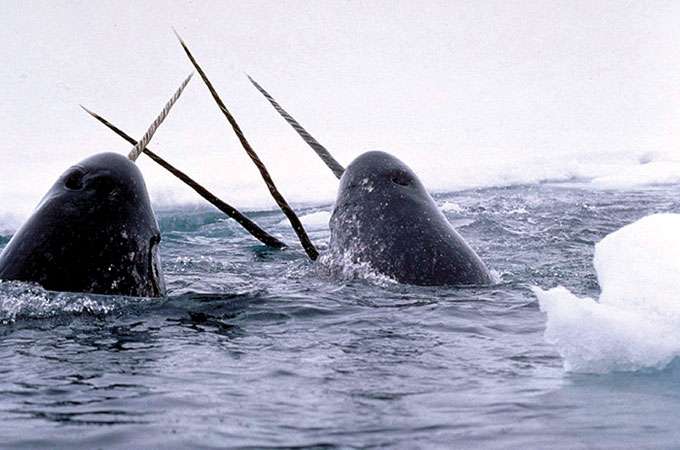 When hunters spotted nearly 100 narwhals trapped in a tiny patch of ice-enclosed ocean off Greenland in the fall of 2009, the news attracted little notice. To narwhal specialists, however, it seemed a little strange. Although ice entrapments were known to routinely kill narwhals on their wintering grounds in the early spring, the Greenland entrapment was one of a string to occur on their summering grounds in the late fall. Now, a new study finds that the odd entrapments could be linked to a changing Arctic climate.

In all, an international team looked at four entrapment events between 2008 and 2010. “In each case, large groups (40 to 600 individuals) succumbed in the sea ice at three separate summering localities, two of these where entrapments had never before been reported,” they write in Polar Biology.

According to one theory, the whales were getting trapped because they were lingering longer in ice-free summer waters. To see whether that concept had legs, the researchers used satellite and weather data to track changes in the “freeze-up” dates in the six largest narwhal summering areas. Over a 31-year period, they found, autumn freeze-up has been occurring later and later—slipping by 2 to 4 weeks. “Sea ice conditions on narwhal summering areas are changing rapidly,” they note. That doesn’t prove climate shifts are behind the entrapments, but it does give polar scientists something to look out for. ❧