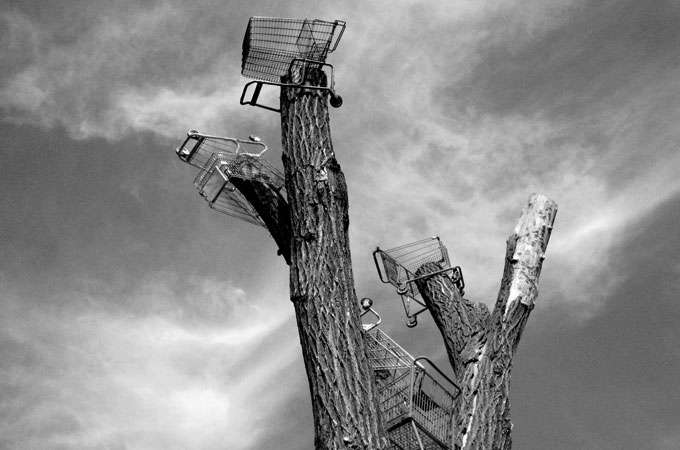 When Enough Is Enough

In developed countries, people are consuming less. Could we be reaching “peak stuff”?

Will rich societies start consuming less? Could wealth go green? Might parsimony become the new luxury? Surely heresy, you would say. But it might just be possible.

Take Britain. A new study finds that the country that invented the industrial revolution two centuries ago reached “peak stuff” between 2001 and 2003. In the past decade, Britain has been consuming less water, building materials, paper, food (especially meat), cars, textiles, fertilizers, and much else. Travel is down; so is energy production. The country produces less waste, too.

This analysis is not the product of data juggling by a free-market think tank. The author of the study is Chris Goodall, a fully paid-up environmental activist and parliamentary candidate for Britain’s Green Party who is also a stat guzzler who once worked for McKinsey & Company. His books include How to Live a Low-Carbon Life.

The stats hold true even when you allow for the ecological footprint from the manufacture of imported goods. And, while the decline in resource use in Britain has accelerated since the economic crisis in 2008, the trend started long before the banking crisis. There was a four-percent decline in overall materials use between 2000 and 2007. So it cannot be attributed entirely to recession and can be expected to survive economic recovery.

Goodall says he believes he has glimpsed “fairly robust changes in long-term trends.” And this is not just about Britain. Similar trends are starting to emerge fitfully across Europe, where household energy consumption in 2009 was nine percent below the 2000 level. France, Sweden, and the Netherlands were all down 15 percent.

Car purchases have been in long-term decline in the rich world for a couple of decades now, because cars last longer these days. But, more surprisingly, car use has also been declining since around 2004 in Germany, France, Australia, Sweden, and Japan as well as in Britain.

Even in the U.S., the capital of consumption, there are signs that something similar could be afoot. American truck mileage has been on a plateau for a decade now. The number of cars on U.S. highways is also flat. And per-capita mileage is falling. As a result, gasoline consumption was expected to be at a ten-year low last year, according to the Department of Energy.

These big materials consumption numbers don’t include the water needed to run our households and grow our food. Each day, we consume in this way about a hundred times our own body weight in water. But domestic water use, too, has been on the decline in most advanced nations. In the U.S., it is down about five percent from the peak in the 1980s, in large part because of low-flush toilets.

What’s going on? Where has this megatrend come from? Is it real at all?

Optimists such as Jesse Ausubel, director of the Program for the Human Environment at The Rockefeller University in New York, see a long-term and unstoppable trend that is the logical outcome of what economists call the environmental Kuznets curve, after its inventor Simon Kuznets. This suggests that as countries industrialize, they pass through an early “cheap and dirty” phase during which they waste resources and generate massive pollution, but then they pass a tipping point beyond which they begin to invest in using resources more efficiently.

Those advancing countries don’t initially use less. But there is a gradual decline in the amount of materials and energy it takes them to generate every dollar of gross domestic product (GDP). Ausubel calls this process “dematerialization.”

In the past, rising GDP has almost always camouflaged this dematerialization. For instance, since 1973 the U.S. economy has each year gotten an average of 2.8 percent more dollar value from each unit of energy consumed. But energy use has still been rising.

However, Goodall says that the pace of dematerialization may be speeding up. Some countries are now reaching the point where GDP and resource use decouple so much that they see actual reductions in materials and energy use. Ausubel inclines to that view. It’s still in the early days, he says, “but Goodall’s paper is potentially very significant and jibes with our work and expectations on dematerialization.”

And what if the drivers are not just economic? What else might be going on? Some see deep-seated cultural trends at work. The decline in car use in the U.S. is greatest among the young. The proportion of 17-year-old Americans with driver’s licenses has fallen from about three-quarters to a half since 1998. Richard Florida, an urban studies theorist at the University of Toronto, sees a new “culture of urbanism” in which online shopping, telecommuting, social media, and walkable urban areas are reducing the reliance of the young on cars.

My own theory is that it could be partly the fallout from an aging society. The old tend to replace their household goods less frequently. And they don’t commute (though they may take more vacations). So it could be no coincidence that “peak car” happened first, in the 1990s, in Japan, the oldest society on Earth.

A pressing question is whether the apparent decoupling of economic growth and resource use is a result of something rather nastier—growing income inequalities. After all, if you give the rich more money, they can invest it; if you give the poor more money, they will be more likely to spend it. So if, as plenty of data suggests, the growing GDP is mostly going to the rich, then the chances of decoupling are far greater.

The one certainty, however, is that it doesn’t mean our planet’s problems are over. The majority of the world is still living on the wrong side of the Kuznets curve. And China’s assault on the world’s resources continues apace. It consumes around 40 percent of the world’s cement and steel, some 30 percent of its rubber and coal.

Equally important, a lot of environmental impacts are cumulative. Even if we are destroying less rainforest each year, we are still reducing the amount of rainforest left for future generations.

Similarly, carbon dioxide emissions accumulate in the atmosphere. We cannot escape our polluting past. China’s emissions of CO2 today may be the world’s largest (and 15 times those of Britain). But if you tagged every molecule of the gas in the atmosphere according to its origin, there would still be more up there from Britain than from China.

I am a Brit. For sure, we still have an outsized legacy of planetary destruction. Even so, as Goodall put it to me, “This country is probably the most ‘virtual’ and ‘dematerialized’ in the world . . .  a possible exemplar.” ❧

Chris Goodall’s analysis can be found at www.carboncommentary.com

This article is an adaptation from a story originally published at Yale e360. Read the full article here.