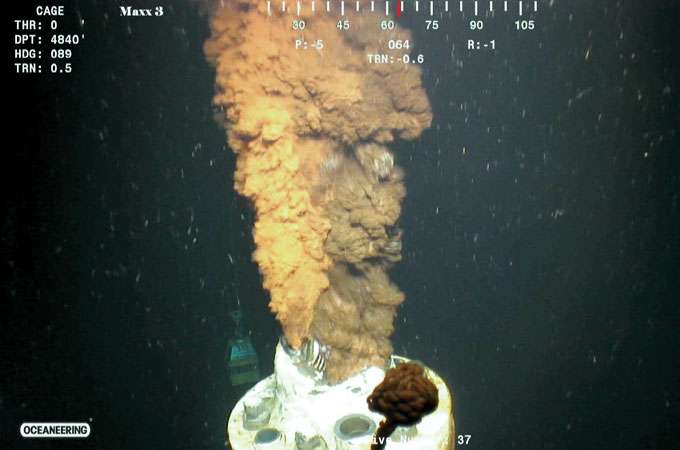 Where Did All That Oil Go?

Bacterial blooms gorged on oil from the Deepwater Horizon spill

It’s been one of the enduring mysteries of the massive 2010 Deepwater Horizon oil spill in the Gulf of Mexico: Where did all the goop go? Try the microbes in the deep sea with a taste for hydrocarbons, suggests a recent modeling study.

Millions of barrels of oil and cubic feet of natural gas poured from a hole in the seafloor during the 83-day battle to seal the well, a research team notes in the Proceedings of the National Academy of Sciences. Some of it ended up on beaches and in wetlands. But researchers also confirmed that the gusher was feeding explosive blooms of bacteria that eat oil and other hydrocarbons. Exactly how the spill influenced deep-ocean bacterial communities, however, has been unclear.

To clarify the waters, the researchers used information on Gulf water movements, bacterial growth, and oil properties to create a complex computer model of the spill. In particular, they looked at how 52 types of bacteria reacted to 26 types of hydrocarbons, and how shifts in currents and deep-sea water masses might have influenced events.

It appears the oil sparked the massive growth of “native microbiota residing in water parcels that recirculated around the ruptured well,” the researchers report. Then, currents caused fresh “inoculations” of bacteria-laden water at the well site, helping keep the blooms going. Such “a dynamic autoinoculation effect may be of broad importance to deep ocean environments,” they note, and play a role in more natural habitats, such as hydrothermal vents and hydrocarbon seeps. ❧