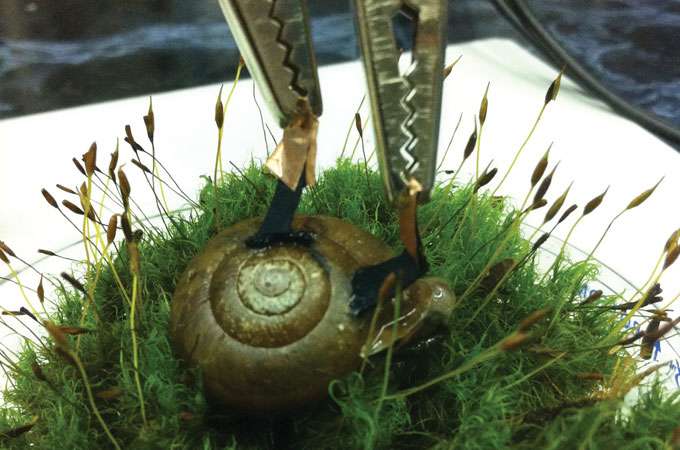 Talk about alternative energy. Researchers have managed to create a biofuel cell that can operate inside a live snail, powered by the sugar in the animal’s body.

The idea of implanting biofuel cells into living organisms has been around for decades. Scientists envisioned that this technology could power biomedical devices such as pacemakers. Small animals with implanted biofuel cells could also be outfitted with sensors and released into the wild to conduct environmental or homeland-security monitoring. But few studies had actually tested the idea in live organisms.

Bioelectronics researcher Evgeny Katz at Clarkson University in Potsdam, New York, and his colleagues decided to try building such a “living battery.” First, they attached enzymes to a pair of electrodes made of carbon nanotubes. One electrode had enzymes that grabbed electrons from glucose molecules, while the other had enzymes that gave electrons to oxygen molecules. The passage of those electrons through circuitry could produce electrical energy.

The team then implanted the two electrodes into a live snail, with one end in the snail’s blood and the other poking out of its shell. The biofuel cell could generate several microwatts of power, the researchers report in the Journal of the American Chemical Society. While this is a tiny fraction of a typical store-bought battery’s power output, it might be enough to activate microelectronic devices, says Katz.

The power output trailed off as the glucose near the electrodes was used up. But if the team stopped extracting power for a while, the animal could build up its glucose supply and more glucose molecules could drift toward the electrodes. After these rest breaks, the power output went back up again. The biofuel cell kept operating for several months, the researchers found.

The team has also implanted biofuel cells into live clams and increased the power output by connecting electrodes from three clams together. Katz and his colleagues are now working on using these living batteries to power electronic devices such as sensors. ❧