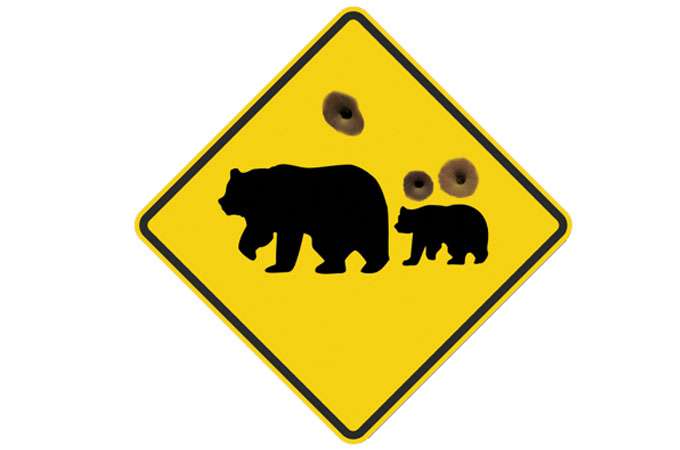 Guns deter bears, but maybe not as much as common sense

The bare necessities for a stroll through the Alaskan wilderness include gorp and sturdy footwear. But how rifles and other firearms for chasing off bears fit in with these must-haves remains unclear. A new survey of bear attacks shows that avoiding bad situations—such as walking between a mother and her cubs—may be a better way to remain unscathed in the far North than toting firearms.

Despite the legends surrounding bear-wrestlers such as Davy Crockett, such man-versus-beast clashes happen less often than many think, say Tom Smith of Brigham Young University in Provo, Utah, and colleagues. Still, when bear fights break out, it’s bad news: both people and animals can be injured or killed in the scuffle. Common wisdom in Alaska suggests that hikers and hunters should keep their firearms handy in case they unexpectedly stumble onto a bear. But researchers haven’t tested whether guns really are good deterrents against black bears (Ursus americanus), brown (Ursus arctos) or grizzly (Ursus arctos horribilis) bears, or even polar bears (Ursus maritimus), the team adds.

To study deterrence, Smith and colleagues recorded incidents involving any of these three Alaskan bear species and humans carrying guns, from 1883 to 2009. They found 269 such tête-à-têtes. And, the team discovered, guns protected people—just not all the time. Humans survived such encounters unscathed at nearly the same rates, regardless of whether they were packing handguns or even heavier-duty hunting weapons—around 80 percent of the time. That’s a good survival rate, but maybe not a ringing endorsement for rifles, the group reports in The Journal of Wildlife Management. In fact, in 40 of the encounters, humans carried weapons but didn’t pull them out, and they were injured no more frequently.

The main reasons why bear attacks turned dangerous didn’t hinge on a lack of firepower but rather on other factors, such as the species involved, Smith and colleagues say. Shooting tended to be more effective against black bears than against brown bears. So in most cases—and especially for less experienced shooters—guns shouldn’t take the place of common sense, the researchers argue. They write that their results “afﬁrm some of the conventional advice for avoiding bear encounters: hike in a group, avoid areas of poor visibility, be more cautious when in brown bear country, and make noise to avoid startling females with dependent young.” ❧